‘World War Kaiju – Book One: The Cold War Years’ is the first in what is expected to be a six book series of graphical novels. The word ‘Kaiju’ is the English representation of a Japanese word meaning ‘strange creature’. We have come to associate it with Godzilla and its foes in the original Japanese films. This novel takes the Godzilla idea off in a new direction. The basic premise is that these huge monsters are developed instead of the nuclear bomb, although they have the same role. They are used by the military to cause horrendous devastation on cities. Of course, once one country develops one, other countries follow suit in an arms race.

‘World War Kaiju’ was created and written by Josh Finney and, for book 1, the artwork was by Patrick McEvoy. The consulting writer was Mike Colbert with additional character design and editing by KatRocha. From the cast of dozens listed as Elite Kickstarter Action Response Force at the back of the novel, I get the feeling it was Kickstarter funded. Now the big question is does the end product justify the investment? Well, I don’t think we have a straight answer to that question.

The story is told from the perspective of a CIA operative who has decided to turn whistle-blower and is divulging the past activities of the CIA to an investigative reporter. This covers the initial development of the USA’s first Kaiju, the revelation of the existence of Pixies and the Martians. It also covers the political manoeuvrings within the US government. While the basic premise is simple, it quickly gets complicated. I’m not sure that the Pixies from the island of Dinki add any value and the Martians don’t play a big part in book 1 neither.

Putting the story to one side, a graphic novel can live or die on its visual presentation and this novel uses a variety of styles to emphasise or differentiate the content. On the whole, it works very well but there’s two pages clearly illustrated by a different artist but no obvious reason as to why it should be different. The quality of the artwork was very good with one exception and that’s the Kaiju. They are supposed to be gigantic fearsome monsters but I kept getting the impression of small plastic figures. Low quality plastic figures! This is a shame as the overall presentation and artwork is first rate.

My second gripe is the bad language and swearing used by the characters. There is nothing in the story or the artwork to mark this out as an adult novel so the profanity is out of place and should have been toned down for a younger audience. I think the initial storyline is good but I have my doubts about pixies and extra-terrestrials as it’s not clear where the story is heading. Which is sufficient grounds to check out book 2 when it’s released. 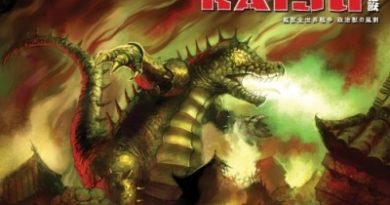