‘Wicked’ is book one in ‘The Wicked Years’ series which currently stands at four books. This is followed by ‘Son Of A Witch’, ‘A Lion Among Men’, and ‘Out Of Oz’. Incidentally, there is also a musical of this book which, as far as I can gather, is very different to the book with regards the storyline. 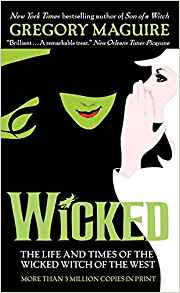 We all know the story about Dorothy and how she landed in Oz and her adventures with the Tin Man, Scarecrow and the Cowardly Lion. We also know that there was an evil green witch, Elphaba Thropp, involved, but do we really know what made the witch do what she did to our adventurers?

This book tries to show how growing up green can have an effect on a person and how things done to achieve goodness can sometimes have the opposite effect. Essentially, this book turns on its head everything you think you knew about Oz by looking at it through the witch’s eyes rather than the rose-tinted glasses Dorothy was clearly wearing. We also get a lot of the politics going on in Oz in the lead up to and during the invasion by Dorothy.

I have to say I didn’t find ‘Wicked’ easy to read, I often found myself getting confused and lost with some of the politics. I also felt that the plot jumped around a lot and left me wondering whether I’d missed reading a section that would make everything make sense. This made me feel pretty bad while reading this as I’d enjoyed other books by Gregory Maguire and couldn’t quite figure out why this one was causing me so many issues.

There were also some shocking scenes in this book that I really wasn’t expecting which made reading at some points quite unsettling. I realised as I got to the end of ‘Wicked’ that these scenes were necessary but I still didn’t enjoy reading them. So be aware that this is quite a dark book, not the all singing all dancing musical version at all.

I found the last bits of ‘Wicked’ a lot easier to understand because the politics all dropped away and we were left with Elphaba and her companions. I even began to feel a bit sorry for her at the end as we knew what was coming for her and her sister. I like the fact that we learnt so much more about Elphaba’s sister so we know a little more about her than just those infamous ruby slippers, at least the way that Maguire saw it anyway. I loved the way that Maguire explained away the flying monkeys I was wondering how he was going to build them into the book.

Overall, I will be carrying on with this set of books but it’s not something I’m desperate to pick up, I’m just glad that the later books seem to be a lot shorter than this massive tome. 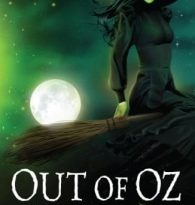 Out Of Oz (The Wicked Years book 4) by Gregory Maguire (book review). 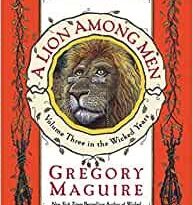 A Lion Among Men (Wicked Years book 3 of 4) by Gregory Maguire (book review). 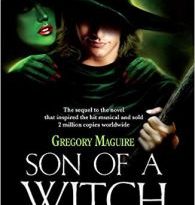 Son Of A Witch (The Wicked Years book 2) by Gregory Maguire (book review).

Out Of Oz (The Wicked Years book 4) by Gregory Maguire (book review).

Son Of A Witch (The Wicked Years book 2) by Gregory Maguire (book review).