Clothes are designed to be either fashionable or usable, sometimes in between. If that is true of the past and present, then it is likely to apply in the future. You would think, especially when it comes to present day designers told to do something futuristic.

Something that can often be overlooked in costume design is the need for the body functions of the wearer. If it becomes a major operation of clothes removal for a quick wee or pooh, then you would have to look at the design, let alone wonder at how the actors got around this between sets. Any women’s dress where they are sewn into it or can barely move demonstrates that, as we have seen examples in the news recently.

There are two good SF examples. The first is with the 1970 series ‘UFO’, from Straker to control staff to Moonbase female officers, it raises the question of how do they attend the toilet. Even the silver catsuits the likes of Paul Foster wears is questionable. At least the Skydiver crews had sensible trousers.

Equally, the said problem also exists for Starfleet personal in ‘Star Trek: The Next Generation’ and series forward from that, where it is apparent that their unforms are zipped up from the back. I’m still amazed how women can get into dresses that zip from the back, men must have an even bigger problem. It is shown that Captain Jean-Luc Pickard, Ensign Ro Laren and Captain Kathryn Janeway have a split top in specific episodes for convenience in a hot climate but it doesn’t appear to be standard dress. Actor Jonathan Frakes also noted the uniforms lack pockets, requiring some needed thinking of where to put your hands in repose. At least, Starfleet dress uniforms were more a proper suit affairs.

Indeed, a lot of how are clothes are normally designed is mostly for convenience of its wearer. Well, mostly. It’s more problematic with women’s dresses with back zips and a lack of pockets. When women wore busells to exaggerate their bottoms, it was simpler for the woman outside to stand by a tree and simply wee standing up than go to the convenience (sic) of a toilet. No doubt differences in diet and restraint covered the problems of a number two.

You can take your pick when it comes to super-hero/villain costumes having a similar problem. Certainly the Green Lantern uniform and the Flash costume have no convenient design taking loo calls into consideration. No doubt the power ring and super-speed might account for such problems but might also explain why super-heroes wear trunks (I’m using the British vehicular) but the leotards or catsuits for super-heroines must be problematic. Of course, in illustration a pencil or ink line may not cover all the details.

In the ‘Watchmen’ graphic novel, Nite Owl II noted the problem of going to the loo after his first night out and quickly redesigned his costume for his convenience. Presumably, his Owl Ship has a latrine hidden somewhere.

There are other problems of conventional equipment anyone would carry. It isn’t just going to the loo, but a need to carry things and not necessarily weapons. Where do you put your keys, mobile phone and even a little loose cash or credit/debit card for the times you need them. You certainly wouldn’t want to carry your civilian ID card with you, unless you needed it in a quick change. Any of this equipment could be lost in a fight so would need a safe zipped pocket or a means to conceal them elsewhere. It has been hinted that some use their lavish large belts or buckles. Bruce Banner concealed some money sewn into his trousers, knowing that would be all that was left of his clothes when he involuntarily transformed into the Hulk and needed when he returned to normal.

Changing into civilian clothes was also problematic, not to mention where to put them. Peter Parker as Spider-Man conveniently webs them as a bundle to a building. At the start of his career as Daredevil, Matt Murdock carried his civilian clothes in a knapsack on his back although when he switched to his red outfit, that was dispensed with. I suspect it was a lot quicker to leave a set of clothes at the office if he needed them and less likely to be ripped up in a fight.

Superman compressed his clothes and carried them in his cape, although you would have to wonder what his shoes were made of to take such treatment. Then again, what kind of boots was he wearing that could be successfully hidden inside another set of shoes, heels and all.

Peter Parker did have some thought with his costume, tucking his boots, gloves and mask into his bet. With the length of his gloves mid-arm, in civies, he could at least roll his sleeves up.

The days of super-heroes wearing their costumes under their civilian clothes has shown their impracticability in the movie age. Equally, there is also a tendency not to show them changing and how long it takes to do so. Imagine them trying to cover a loo call and having to strip down two layers and hope they never have a stomach bug. Considering there was a phase of them wearing leather and the actors saying how hot it was to wearing such apparel shows little thought in fabrics or moving in them.

Undoubtedly, Dr. Reed Richards unstable molecules material isn’t available. You would think something like Kevlar pieces on stretch fabric should be considered, especially as Daredevil’s third costume was built up on such a design, providing some protection and flexibility to move in a parkour fashion. What is a bigger surprise is no obvious signs of a box to protect the male wedding tackle. No matter how strong they are, a kick in the balls would keel anyone over. Often in film versions, such a box arrangement was more a need for continuity consistency and which way the actor’s wedding tackle swung. I doubt if anyone thought to use incontinent and other absorbency pads. 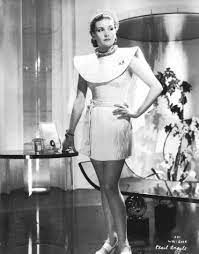 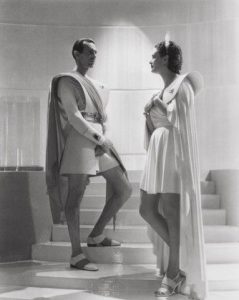 At least a futuristic male skirt means less problems with a loo.  That is all a side issue. When it comes to futuristic costumes, a lot of the, shall we say, peculiar costumes started off with ‘Flash Gordon’ and certainly the film ‘Things To Come’ (1936). The latter is an odd film, spread over many generations and four costume designers depicting different eras. With the future, ornate tops and principally white. It even got caught on one of the book covers of ‘World Of Null-A’, much to my amusement.

Although other than being described as temperature-controlled suits, there was little description of attire in the Null-A books. It wasn’t until the likes of ‘Star Wars’, again white armour, that future clothing began to change and ‘Alien’ and ‘Bladerunner’ went into well-worn lived in dull clothes and grunge became fashionable putting to rest the whites. Not totally though. One only had to look at the original ‘Battlestar Galactica’ and ‘Buck Rogers In The 25th Century’ but they were the dregs. Clothes began to reflect individualism than being uniform. Well, everywhere but Starfleet but they were military and as pointed out earlier, not very practical. 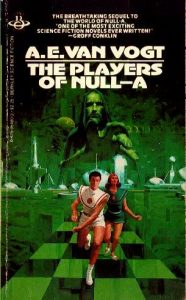 There also has to be awareness of budget and a variety of futuristic costumes still costs a lot of money that tends to be affordable on a large film budget. In many respects, it tends to be the environment that tends to make the bigger impression and as long as the clothes don’t look too far out of place, even modern day becomes passable. Then again, compared to a few decades ago, there is such a variety of clothes and fabrics in use out there now, you’d be pushed to find anything that would be called ‘futuristic’ for long. Even so, there is still a practical need for pockets and accessories that I doubt will ever go away and costume designers need to consider this.

Of course, whether its books, film or TV, we rarely see characters off to sort out body functions, mostly because it doesn’t propel the story forward. Off the top of my head, only ‘Babylon 5’ had a look at it, mostly because of different alien needs on the space station. It’s only looking at the blueprints for the original USS Enterprise to note that there are two heads (the naval terms for loos) on either side of the screen for bridge crew, with no preference for either sex. Anyone rushing to one of these heads, wouldn’t leave much imagination where they were going or for how long.

With the Next Generation, one can presume that Picard had his private head in his room off the bridge and the other bridge crew had similar arrangements to the earlier Enterprise. In space, no one hears the cistern. The assumption that, like a lot of activities, we just take for granted is done off page or screen carries this a lot. The lack of detail in costume design is pretty much like nit-pickers picking out mistakes and yet miss things like this.

Other examples are out there but I could spend forever pointing them out. Have fun wondering just how they did it and feel sorry for anyone inside a robot costume because they didn’t have such problems.

For future (sic) costume designers, be aware of the needs of the body not only for loo calls but pragmatic needs for carrying personal possessions, even if its just a mobile phone/computer without falling out. The designs of the future are far more likely to be thought more practical than just an aspect of a film or TV series.