For modern Batman fans, Gotham City’s Arkham Asylum would appear to have been there forever but was actually created in October, 1974 in Batman # 258 by writer Dennis O’Neil and artist Irv Novick and was a hospital not an asylum as recounted by editor Sharon Packer. Logistically, you would think it would have wondered why it didn’t happen earlier but prison was prison back then and Batman’s rogues gallery were mostly thought of as criminals than mentally insane.

Well, except the Joker and Two-Face, who was the villain in that story. By the by, the graphic novel Packer is referring to as ‘A Serious House On Serious Earth’ we know simply as ‘Batman: Arkham Asylum’ so don’t get confused. 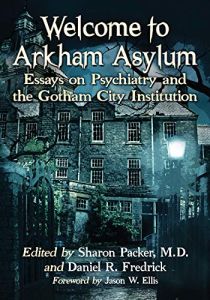 As if you can’t guess from the title, ‘Welcome To Arkham Asylum’, the sub-title, ‘Essays On Psychiatry And The Gotham City Institution’ is a serious look at a certain mental institution where your admission fee is your insanity and that includes some of the doctors there.

Prepare for a roller-coaster as a group with only a couple psychiatrists among them examine the Arkham Asylum and occasionally some of their inmates. Oddly, I don’t think the original comicbook writers ever read a book on the real thing when constructing their stories, especially back in the 1970s. How much that has changed today depends on what Grant Morrison did. With this book being available now, it should be recommended for not only ‘Batman’ writers but for any writer who needs to understand the real mental conditions and treatments used as well as history of the real and fictional versions. Even so, the Gotham City version still looks very Victorian by modern day standards.

Elyse D. Weiner’s look at Elizabeth Arkham, whom the building was named after, was really an eye-opener as she explores all the symptoms shown in her story. A further examination of the shock treatment used to cure some patients also shows you don’t need high voltage to do it with. Again, the fiction of 10,000 volts is remembered than the actual 10 volts.

Ryan C.W. Hall and Susan Hatters Friedman rather surprisingly point out that playing computer games is actually healthier than not for most people. Non-players have worse mental health. The numbers stack up far larger than those who turn psychopath as that was their only influence. You do have to wonder why that myth persists in the mass media. Perhaps they need more psychiatrists putting them right about such things. Later, Sharon Packer herself points out the same thing applies to films as well. The press obviously latch on to the wrong triggers.

Oh, just to show this book has my undivided attention and someone should have spotted this at the editing stage, on page 99, writer Fernando Espí Forcén has the Joker killing James Todd rather than Jason Todd. Bear in mind, much of this book is a deep read and, if you’re absorbing, will probably mean a couple chapters a day although the later sections of the book are easier to absorb.

The discussion of Harley Quinzel and the Joker breaking the doctor/patient border is well discussed by Sharon Packer as breaking all the rules and no one spotting what is going on. You do have to wonder who was in charge of Quinzel as an intern? Adding my own analysis here, the original Batman animation episode came out in 1994, around the same time as ‘Natural Born Killers’, which had a similar problem where the doctor becomes as mad as his patient and finding it liberating as they themselves became deranged.

I doubt if they influenced each other, just a matter of parallel thinking at the time. Considering the love/hate relationship between Harley Quinn and the Joker, I don’t think it’s actually based on a sexual relationship though. The Joker and laughing fish was hardly new in 1993 as Steve Englehart and Marshall Rodgers did this originally in Batman # 474-75 in 1978.

In many respects this book is often more about the asylums and its doctors more than its patients. There is some repetition considering this book is also supposed to be looking at Arkham Asylum although there are the occasional whistle-stop tour of asylums in films and TV series. The geek in me hits on which ones have they missed out on. Strangely, none refer to the asylums in ‘The X-Files’ (1993-2018), ‘Terminator 2: Judgement Day’ (1991) and ‘Silence Of The Lambs’ (1991). More so when Darren Harris-Fain and Eric J. Sterling do a comparison between the old ‘Star Trek’ story ‘Who Gods Destroy’ and Arkham.

A quote from comicbook writer Danny Fingeroth points out that most of the time in Batman stories there is a need to maintain the status quo than changing things drastically. Of course, HP Lovecraft is included because that’s where the name ‘Arkham’ came from in the first place.

There is a lot to digest in this book and plenty to think about. You should also keep a notepad nearby because I suspect you will want to look up some of the books, graphic novels and films noted in case you haven’t seen them. Although there are some obvious repetitions, there are some areas I wish were better explored, like keeping such people locked up and solving their madness.

Some, like the Joker, are obviously going to be noted as incurable and unlikely to be reasonable no matter how much discomfort or comfort given when locked up. Certainly the lesson learnt from Harley Quinn is to keep interns away from such people. Learn and beware, just don’t get mad.