Eli and Victor were best friends in college until a project on EOs, ExtraOrdinary people with strange powers, went wrong. Victor went to jail and Eli went on a quest, but now Victor is out and he wants revenge on the man who ruined his life. As the two circle closer towards a final conflict, each must choose his friends carefully and decide just how much they are willing to sacrifice. ‘Vicious’ by V.E. Schwab is a tale of super-heroes and ordinary men trying to find their places in the world and figuring out the difference between right and wrong. Containing elements reminiscent of noir detective stories mixed with classic comicbook ideas and a dash of philosophy to make you pause for thought, it all combines to make a very good read.

The central idea is that certain people, on recovering from traumatic experiences, might develop ExtraOrdinary powers that defy rational science and medicine. Yet what would happen if you could rationalise this strange effect? Could you create EOs? Should you? How would they integrate into society? Would they be hunted or accepted? There’s nothing wildly new here, but Schwab deals with it all brilliantly so that the story at once seems completely fresh and utterly timeless.

The central characters of Eli and Victor are nicely drawn, Victor probably being the more well-developed of the two. They are quite distinct and it’s easy to see where they came from and how they ended up where they are when we encounter them. I liked Victor, even with his many flaws, and enjoyed his interactions with his two companions, a large tattooed fellow inmate and a thirteen year-old girl with powers of her own. Eli I found intriguing rather than likeable but I think that’s a good thing. Each person featuring in this story, even the minor characters, comes across well and has enough individuality to make it an engaging cast.

The plot is a pretty basic revenge story but there is enough detail and enough in the way of side stories, back stories and complications that it never becomes predictable. A lot of the detail is told in flashbacks which in some books I find irritating, but here it works well, providing more information just when it is needed. I also really liked the ending, it was more satisfying than most and when so many books are let down by hurried or contrived endings that is a definite selling point.

Before I wrap up, I’d just like to mention the cover art by Victo Ngai which is beautifully drawn. It is highly stylised and extremely detailed and is just the kind of thing that would make me pick this book up off the shelf to find out more. It is also the kind of cover that makes you think about how well this book would work as a graphic novel and I wouldn’t be surprised to see some kind of graphic adaptation of this in the future.

I really enjoyed the world that V.E. Schwab has created in ‘Vicious’ and I hope that perhaps she might revisit it at some point. I’d certainly sign up to read a sequel and there is easily enough material for a whole series of books in this setting. ‘Vicious’ was a great read and I look forward to more from this author. 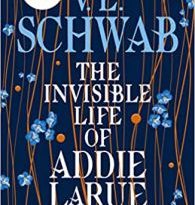 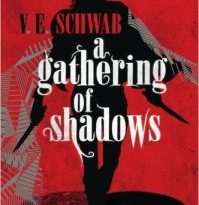 A Gathering Of Shadows (Shades Of Magic book 2) by V.E Schwab (book review) 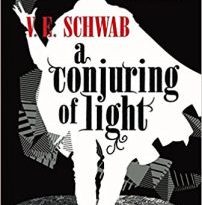