For most of us, significant UFO sightings started around World War Two with pilots reporting something called ‘foo fighters’, unidentified lights tailing them in flight from time to time. However, as author Nigel Watson points out, we’ve been seeing odd things in the sky long before then although he focuses on, as the title ‘UFOs Of The First World War’ an earlier time period, but just not WW1 itself but also around the world. Although there is a lot of focus on dirigibles, I have to confess that I’ve never heard or read of anyone saying later, ‘That UFO I saw was a Zeppelin or early aeroplane.’ The bigger quandary is if it’s not extra-terrestrial then just what has been going on inside our heads over the centuries? Forget the cover illustration, the descriptions often tally with more familiar terrestrial objects. Later in the book, Watson reveals that people thought a Zeppelin was an ordinary aircraft which makes the reports of cigar shapes in the sky more peculiar.

There is some focus on the UK and the reported number of unauthorised airships flying the skies leading up to pre-war. The spread across the country and Northern Ireland is a full-scale flap but with it travelling at night, one has to wonder where it hid during the day and what it hoped to achieve. These aren’t the kinds of things you can land and quickly pack in the back of a truck today, let alone a century ago. Even with a spotlight, it could hardly have been used to map anything significant for the war. Likewise, after WW1 and access to German records, surely some account of its activity should have been available. It’s a shame really that Watson hadn’t included a map of the sightings to put things into perspective and how far it travelled as from all accounts, it looks like there was only one, although there were reports from other countries later, including Australia which would have been pretty isolated to have gotten so far. When you consider also that these are pre-flying saucer days, these airships also neatly fit into the cigar shape that has also been seen much later in the skies after airships stopped being used.

This isn’t to say that there wasn’t some hysteria. Oddly, that was in Canada but with a World War looming, I would have been surprised had there been no anxieties and people seeing things that weren’t really there.

Watson does cover various fictions that emerged in the press, including seeing angels in the sky and even the Red Baron shooting an unusual aircraft down so there is some balance here.

Looking at all of this from a 21st century analytical mind now, I think I would be inclined to look at the type of people who are seeing such things. Were they in stressful occupations? Were they capable of being convinced by others of what they were seeing? Their ability to exaggerate or gossip and other people expanding could also be contributing factors.

Although Watson has not gone the alien route, at a time period where aircraft were few and far between, you have to wonder what was going on back then. Considering so many of the reports had a little more than just seeing things in the sky but noises like propellers, which they wouldn’t have heard elsewhere tends to be something a mirage doesn’t do, I did have to wonder. People can imagine sightings but noise to go with it?

The one thing I wish books of this nature would do is have the author express his opinions in conclusion than give evidence and let the reader decide. I can see that this might be seen as trying to persuade the reader in a particular direction but equally even saying he doesn’t know what is going on but just some oddities that were identified from evidence would be something. After all, these are supposed to be UFO experts who should be able to discern between fake and real sightings these days. Cigar-shaped UFO sightings have come up from time to time in more recent years but when you consider most people tend to report the more, shall we say, saucer kind, you do have to wonder why that particular shape. More so now, where dirigibles don’t fly in the sky and I doubt if anyone would confuse a hot air balloon with anything else now.

If they were man-made objects and German at that, then these UFOs must have had considerable range and must surely have had been on record somewhere. Any private dirigible would surely have been revealed later as the war effort then and later in World War Two secured any material for it. People’s night vision was surely better back then and I doubt if there were any flights (sic) of fancy with things in the sky because mostly it wasn’t something you’d expect as you would today. As such, I’m notching this up as something rather odd for the time period. 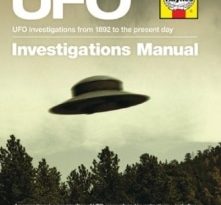