Following the events in ‘He Kills Me, He Kills Me Not’ and the Eighth Doctor (Paul McGann) seems to be in an unholy alliance with his favourite enemy, the Daleks. They have some mutual concerns over who has been altering time. The Doctor has already worked out there are planets that shouldn’t be there and some that bear no resemblance to ones he was previously aware of. 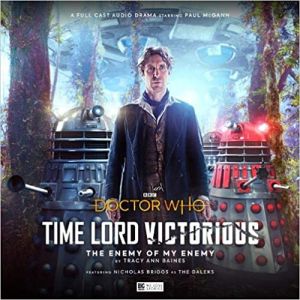 Off they go then on a jolly expedition just the Doctor and his new, rather poisonous companions to the planet Wrax. The inhabitants, who seem highly civilised, are very interested in talking to the Daleks and making some sort of alliance. It looks like odd friendships are all the rage this year. The President Sarathin (Rachel Atkins) and her advisor Lord Borus (Raj Ghatak) are both fascinated by the Doctor. He is equally interested as, in his time, the Wrax don’t even exist and the planet is a barren rock. There is something very wrong and the Wrax are unlikely to be what they appear.

‘The Enemy Of My Enemy’ is a more action-based adventure with multiple Daleks with their own little personality traits. I absolutely love the way Nicolas Briggs is able to create a family of the pesky creatures who are easily discernible from each other even on audio. There’s some nice snappy dialogue from the Eighth as he attempts to find out what the truth is behind both the Daleks mission and the Wrax. Inevitably, it’s all going to end in tears and the Doctor’s attempt to create a fair outcome is bound to be hi-jacked by the Daleks. Essentially, we are seeing that however well-meaning he is, there are forces that will cause his failure.

There is very much the feeling that this is leading to the day that he cannot accept his role as hero but becomes instead the man taking direct action in the ‘Time War’. Paul McGann interprets the dry wit of the Eighth as written by Tracey Ann Baines very well. His insouciant manner is on the surface just a continuation of previous Doctors but, throwing this forward, we can see that this cannot continue as a survival strategy.

Events in this adventure set up the novel ‘All Flesh Is Grass’ but it can be listened to without reading the book after. The multi-platform idea is a superb way of upselling the range though and who can resist? It is futile as someone or something once said.

The adventure is around 55 minutes with 20 minutes of background with some of the participants with the standalone music suite. The production team are more or less the same except each episode has a different writer, in this case an all-female ensemble. The adventures are more or less contained but do form a cohesive whole.