Lately, the Doctor has become nearly a secondary character on his own show but is clearly the centre of attention this time. With the promotion of ‘Time Heist’, largely because of guest star Keeley Hawes, there is already great expectation before it gets shown. Certainly, the hype shows a lot of the money has been chucked at it.

I’m wondering what Steven Moffat is contributing to these stories where he’s co-writer and I suspect it might be the Clara/Pink relationship.

There are elements of memory erasure films in the opening of this story. You might be able to name them but I’ve forgotten them for some reason. Considering the Doctor identifies why a cyborg and a shape-shifter are required as part of the team, it does make me wonder why these two don’t ask what Clara is supposed to contribute other than be a target for the Teller, a brain eating creature. This Teller is an interesting looking creature. With a maze, it could even pass for a minotaur. Looking at the grandeur of this episode, it looks like the budget was put here after last week’s bottle show. Ms. Delphox isn’t exactly a villain per se and wouldn’t have looked out of place in ‘The Sarah-Jane Adventures’. Shame it’s left in a situation where she won’t come back again but then, there isn’t necessarily a need for the original body if you see what I mean. An apparent manipulation into doing a bank robbery is controlled by the hidden Architect. In some respects, my first guess as to who it was seems to have been right. It only takes a little knowledge about some people to figure it out. The fact that none of the team can remember why they are selected or volunteered to take part only adds to the mystery.

Again, we see pictures on a screen and some of the aliens the Doctor has encountered. Considering this is happening every episode now seems more than a co-incidence. I do hope someone is considering bringing back the Sensorites. They and the Menoptera have been gone for far too long.

This story is the best of those shown so far. Not perfect, I grant you, but it at least has a plot that can be followed, even if some elements are retrograde and you need to wind back to cross the dots. I did wonder why the Doctor didn’t use the floor opening device on the safe door but then the events that had to happen wouldn’t have which means I would still have questioned how much of a memory he still had.

Now all we have to worry about is the extra hour before viewing next week. Will things get back to normal when we switch back from British Summer Time? 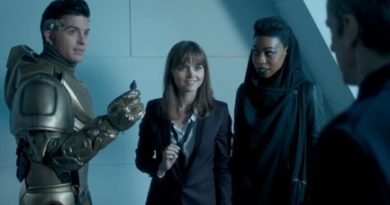