Three is a bounty hunter. He is well equipped for his chosen career, dark hood and attitude. He’s the typical loner, bristling with enough weaponry and broodery to discourage casual approach. A woman, Cass, and son, Wren, approach him anyway and ask for his help. Even as he offers a substantial stack of local currency, Three seems to know money won’t solve the woman’s problems. So, against better judgment, he follows her and becomes immediately entangled in a plot that involves more than one woman and boy. Dodging chemically enhanced predators, brain hackers and the zombie-like Weir, Three, Cass, and Wren cross a post-apocalyptic wasteland in search of shelter and answers. In order to protect her son, Cass is running from her old crew. Three questions his motives at every turn. The chase begins to wear away his edge and gruffness and the world he has trained himself to navigate is changing.

‘Three’ is more than just another novel of the apocalypse. It’s a tale of adventure and intrigue. It is unclear how long ago the collapse occurred, but it is very clear the world is not ours. Not our present, anyway. The remnant population is confined to armoured cities which are separated by Weir-infested wasteland. The Weir might be zombies. They’re mindless, hunt at night and have terrible claws, but they emit electronic screams and their eyes glow in the dark. The people of this world are permanently wired. They can ping satellites, read data flashed across their retinas and communicate with one another using only their minds. Many have genetic enhancements and chemical processors.

The story is fast-paced. I found it hard to put the novel aside. Still, the central characters are fully formed. Three is particularly compelling. He is obviously different. Questions surround his past and his actual purpose, a few of which are answered as events begin to dull those sharp edges. Cass is heart-breakingly human in her faults and need to protect her son. The villains vary. Some are just nasty, some have a secret heart.

‘Three’ is an impressive debut. The plot and setting are different enough to stand out from the post-apocalyptic and dystopian crowd, while still appealing to the same readers. I look forward to reading the more ‘Legends Of The Dustwalker’. 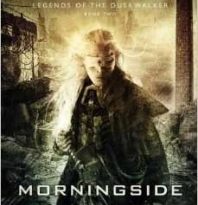