Terry Gilliam of Monty Python fame is well-known for adventurous and stylish movies, ‘Time Bandits’, ‘12 Monkeys’, ‘Brazil’ and ‘Baron Munchausen’ coming to mind and, last year, he directed ‘Zero Theorem’, a quirky, odd, colourful and delightful Science Fiction movie which is now released on DVD. Written by Pat Rushin, here we have a bizarre world of the near future, a sort of colourful ‘Metropolis’ with comedy thrown in. Christopher Waltz takes the part of a completely mad programmer, Qohen, who has the job of crunching numbers for a mysterious company named Mancon. In an absurd open plan office, he is the equivalent of today’s call centre employee, relentlessly pursued for progress until he can’t take it anymore. He wants to work from home but has had his plea refused by the medical board and, returning to his house which is a rundown church, his mind is going into overdrive. One thing keeps him going and that’s the telephone. He is waiting for a call which will explain the meaning of his life! Now, where in Monty Python have we heard that before?

There are lots of good acting performances to be found, in particular Joby (David Thewlis) the supervisor and also the computer psychiatrist, Dr. Shrink-Rom, played by Tilda Swinton. Matt Damon makes an appearance as the Management and there is also the online porn queen Bainsley (Melanie Thierry), who rescues Qohen from choking to death on an olive at a party. Oh, and there are an odd assortment of rats that pop out from holes to eat any food that goes astray. The rats seem to be generally accepted by the zany population so maybe they have become a necessary part of society, sweeping up rubbish to keep the place clean.

Eventually, the frantically disturbed Qohen is allowed to work from home but things don’t really get any better. He has nightmarish dreams of a black hole, the singularity into which everything will one day disappear. This is the basis for the ‘Zero Theorem’ which basically states that things start up as nothing and end up as nothing so all the rest in between is essentially pointless and a waste of time. Despite the psychiatrist’s best attempts to help, he smashes up the computer with the assistance of a hammer but this act doesn’t seem to annoy Management.

The number-crunching graphics are pretty good but, of course, the theory is a lot of nonsense. Trying to prove mathematically that the universe is pointless and without basis using a tool from that very same universe is an example of inversion of possibilities but maybe that’s why they are all crazy in this movie.

A couple of visitors come by, the attractive Bainsley trying to direct his attention from the telephone calls and other distractions but is this love or is it a paid intervention on behalf of Management. Bob (Lucas Hedges) is a computer whiz kid who tries to help out with the number-crunching but it ends up being too much even for him. Matters begin to take a downward spiral from this point and disillusionment descends, making Qohen take ultimate decisive action or, should it be said, destructive action.

The characters are very unique and varied, colourful and interesting except perhaps for Matt Damon’s Management, though he’s not supposed to be like the others. When everyone is having a great time at a party, merrymaking in a wide variety of absurd costumes, Management sits serenely in a separate room, observing and, of course, managing. Throughout the movie there doesn’t seem to be a flat moment because it’s all set at a furious pace. We then begin to wonder what the hell it’s all about and when you get to the end you realise what that may be.

A really great movie, it’s one that will stand the test of time. Maybe not to everyone’s taste, it is nevertheless a classic statement in Science Fiction moviemaking and it will probably end up in years to come as one of these so-called cult films. It’s certainly memorable and enjoyable, so much so that you would want to watch it again. With the DVD which has UV copying utilities you will be able to do just that.

Extra material with a DVD includes a feature entitled ‘Behind The Scenes’, plus additional features on the sets, the costumes and visual effects. There were a couple of interviews with people involved in the production but what I would like to have seen was an in-depth interview with Gilliam talking about this work and the stuff he has done in the past. However, you can’t have everything.

‘Zero Theorem’ is a fun movie. It has a distinctly British feel to it, from the sets to the acting itself but the humour is acceptable to everyone, including the USA. I couldn’t help thinking about ‘Hitchhiker’s Guide To The Galaxy’ and the ultimate answer to everything being 42 but what do you expect from a movie? Did you really think you would get the answer to everything? If you did, you would be just like Qohen! 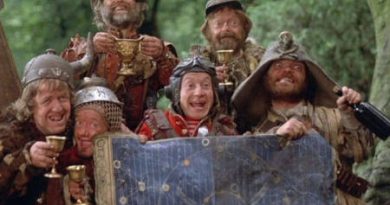 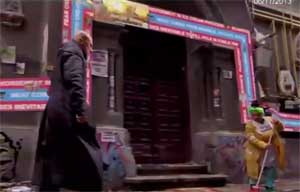