‘The Dragonfly And Dragonflyman’ comicbook series revolve around the idea of there being two similar dragonfly themed heroes, one on Earth Alpha, a Silver Age world of colourful villains and ‘biff!’ punch effects and the other on Earth Omega, a dark noir world of blood and corruption. 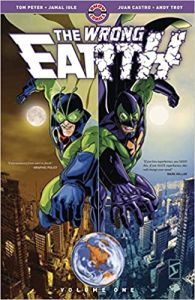 I reviewed the ‘Dragonfly And Dragonflyman’ graphic novel a while ago (here: https://www.sfcrowsnest.info/dragonfly-and-dragonflyman-written-by-tom-peyer-art-by-peter-krause-and-russ-braun-graphic-novel-review/). Even though the stories in it act as a prequel to ‘The Wrong Earth’, I don’t think it makes much difference which order you read the two books in. There are only a couple of elements of the prequel that directly feed into ‘The Wrong Earth’, though one particular element will hit a little harder if you do read ‘Dragonfly And DragonflyMan’ first.

Anyway, back to the ‘two versions of the same hero’ premise. In the ‘Dragonfly And Dragonflyman’ graphic novel, this setup was used to juxtapose the two comic styles against each other, providing entertainment by swapping back and forth between colourful and dark, but without the two worlds actually colliding. ‘The Wrong Earth’ takes the premise a step further by having Dragonfly and Dragonflyman jump into each other’s worlds and then has fun with the fish out of water angle of how each hero reacts to the rules of their new comic’s style.

Just as I was surprised how the original ‘Dragonfly And Dragonflyman’ stories took the two heroes/worlds idea further than I expected, I’m similarly impressed by how ‘The Wrong Earth’ subverts what you think will happen with its premise. It’s packed with small but fun details, like the heroic Dragonflyman providing his own ‘Pow!’ sound effects or the noir Dragonfly simply gunning down a villain in cold blood in a Silver Age world. I also liked that both heroes quickly work out what’s happened, avoiding the frustration of the reader being ahead of the hero and demonstrating how smart and driven they both are.

The heroes are pulled into each other’s world through a shared villain, though one version is colourful and camp and the other is basically the Joker, to the extent that you’re given no idea of his backstory or motivation, he simply does evil things. But if anything the villain is eclipsed by his sidekick, Deuce, who goes beyond the initial ‘she’s Harley Quinn’ angle to some fun places and even allows the comic to comment on the male gaze, with frames focused on her body when males leer at her. The art style is clean and dynamic and helps remind you which world you’re in through use of shadows and colours.

Perhaps my biggest complaint about this book is that while it hints at a larger story, it’s very much all setup and no resolution. Where ‘Dragonfly And Dragonflyman’ ended on a cliffhanger but could be read as a satisfying standalone, ‘The Wrong Earth’ asks a lot of questions but doesn’t answer any of them and ends on yet another cliffhanger. Further adventures of Dragonfly And Dragonflyman are promised by the publisher but aren’t out yet, so be warned that this is very much part one of an ongoing story. Otherwise I really have no hesitation in recommending this book. It’s clever, funny, occasionally gruesome and, as mentioned, manages to subvert what you think it will do with the premise.

A final note is that the main story is followed by various short pieces which manage to be both more disturbing and cutting than the main comic. They pack in villains like the Nimby, who opposes progress, a dig at Zack Snyder’s DC films, and have Dragonfly grotesquely overreact to a villain’s petty scheme. These little footnotes pack a lot into short stories and help the book end with a bang. 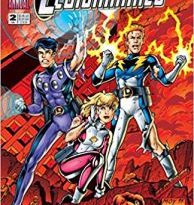 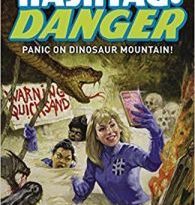 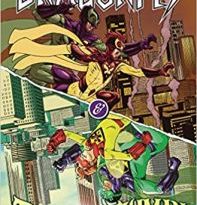