This is the fourth edition of Christopher Vogler’s book, ‘The Writer’s Journey: Mythic Structure For Writers’ and it relies on Joseph Campbell’s ‘hero’s journey’ as a basic plot. As Vogler explains in his introduction, the suits in Hollywood jumped on this as having a readymade formula to reduce the role of writers. I did raise an eyebrow on that. After all, Vogler is advocating the use of this plot after all. Writers from George Lucas down have used this plot and I’ve currently found another 129 basic plots with many not getting a regular look in. 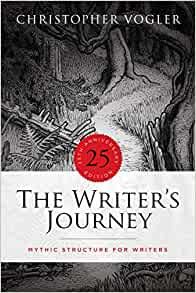 It’s hardly surprising that the original ‘Star Wars’ film is given as the prime example of the Campbell plot. Oddly, I had a revelation here. Everyone refers to this plot as belonging to Luke Skywalker yet the same story elements apply to Han Solo and Leia Organa as well, with the latter turning into a mentor to the mercenary. I do think some of you will be surprised by the other film examples here that follow the Campbell plot. I would correct on a couple films. With the first two ‘Terminator’ films, neither robot are related or transferred any information between themselves to change from threat to helper as that was all down to programming and script rather than evolution of the same character. I also think ‘Harvey’ of the same name film would be insulted to be considered as a hallucination, more so as other people could see him as well.

Although the ‘Filmography’ used is listed at the back of the book, I do think it might have been useful to have been shown it at the front of the book specifying as to which examples are associated in which areas of the book to give you a heads up to watch them before reading. Although I doubt if even the most earnest film viewer has seen all the examples Vogler used here, it might give a heads up on ones you might want to catch up on before reading, let alone Vogler’s own taste.

Oddly, he includes ‘Prometheus’ and yet ‘Aliens’ with the reluctant Ripley rising to the challenge is omitted. I do suspect your own memory will be running over other films not covered but fits the patterns he describes. It is problematic that any film could be made to fit the Campbell plot. Most of the examples do revolve around ‘The Wizard Of Oz’ and only deep analysis of five films at the end.

Something I hadn’t remembered was Mentes or Mentor was actually a character in ‘The Odyssey’ as a…er…mentor to Odysseus and the name stuck.

I am a little puzzled by the use of the film ‘Witness’ as an example. I mean, if you ask what people remember about the ending, it’s John Book fighting the bad guys in the silos than him standing with the Amish as the end. The end of ‘Alien3’ was less a need to keep to the Campbell plot and more to do with Sigourney Weaver’s wishes for this to be her final film in the franchise.

It also feels a little contradictory in the conclusions not to rely on the hero journey as the ultimate template and then pick five significant blockbuster successful films for detailed analysis. Maybe it’s the British way, but it would have been more interesting to have at least included some failures showing where this doesn’t always work well. I should point out that Vogler worked on ‘The Lion King’ working out where the script was going wrong before it was animated and one of his examples.

His analysis as given by the top people in the movie industry to find a link or contract to the audience is telling. Much of the time they relied on the likeability of stars to get bums on seats.

I do wonder at his discussion on ‘Rumpelstiltskin’ why no one had thought to do it from his perspective. After all, it was the girl/queen who reneged on the deal that ultimately took his life. Supernatural creatures might kidnap young children but they certainly never kill them as they are returned eventually.

Maybe its just me but using chakras (wheels of energy throughout the body) for the vibes about feelings didn’t really register with me. Are films that spiritual to need such things??

A nuisance in this book is Vogler refers to film roles more often by the actors playing them than the parts themselves. Granted not all readers will have seen all the films he references but mixing them is far worse. Surely it would make sense to have the part and bracket the actor afterwards as the best choice. The fact that he fluctuates through 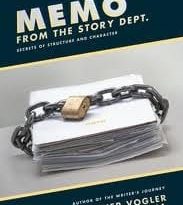 Memo From The Story Dept. by Christopher Vogler and David McKenna (book review).

Memo From The Story Dept. by Christopher Vogler and David McKenna (book review).