‘The Woman Fantastic In Contemporary American Media Culture’ is an examination of the portrayal of female protagonists in mostly comicbooks by various writers. Although I agree with them that Sheena The Jungle Queen and Wonder Woman are two of the earliest with their own titles, there seems to be a big gap missing before they get to ‘The Savage She-Hulk’.

With DC Comics, Lois Lane had her own title for a couple decades and someone must have been buying it to keep it going. It isn’t as though Marvel didn’t have female titled comicbooks before ‘She-Hulk’ with the likes of ‘Millie The Model’ and ‘Night Nurse’. ‘The Claws Of The Cat’ only lasted 5 issues but was written by Linda Fite and a super-heroine. That incarnation of Greer Nelson didn’t last long but her transformation into Tigra did. ‘Spider-Woman’s own title is point out and both her and She-Hulk were created to avoid a copyright issue with the animation companies although there is no mention of the She-Thing. 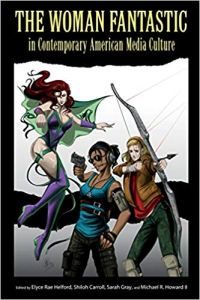 So we have a look at She-Hulk by J. Richard Stevens and her general lack of definable clothes other than a ragged white dress when Jennifer Walters transforms into her green taller version in her first outing. I suppose we should be grateful that she never wore jeans at that time in her career. Being green didn’t hurt her proclivities although you do have to wonder why none of the men in her life had any male equipment left considering all her muscles are extremely strong.

For those of you with an interest in ‘Game Of Thrones’, Alex Naylor has a look at Sansa but as I don’t watch the series I’m not really sure what is going on. The same also applies to Starbuck from the reimaged ‘Battlestar: Galactica’. Interestingly, Ewan Kirland briefly compares her to a a lot of other powerful female characters across the media that don’t appear in this book. The same also applies to the two fantasy book series in the final two sections with Cinda Williams Chima’s ‘The Seven Realm’ series and Stephanie Meyer’s ‘Twilight’ books.

Tosha Taylor’s look at Talia al Ghul centres on her later incarnations but not which version of the DC Universe. As she’s a cross between Arab and oriental blood, it’s hardly surprising that different creative teams have played with these different aspects of her character. As I haven’t read her later adventures it’s hard to give judgement on her more placid moments but like her father, she is supposed to be manipulative.

I don’t tend to normally nit-pick but Nicola Mann’s examination of Martha Washington’s storyline is marred a little by thinking someone called Joe Salmon and not Joe Simon co-created Captain America with Jack Kirby. I remember reading the first graphic novel of ‘Give Me Liberty’ and there was enough food for thought for thinking it might be worth looking up the complete saga by Frank Miller and Dave Gibbons.

Rhonda Nicol uses Carrie Vaughn’s ‘Kitty Norville’ book series as an example of empowered women in fiction and only briefly mentions Charlene Harris’ ‘Anita Blake’ series that predates it by a couple decades. I do suspect that considering how many books each series had, you would be kind of stuck to read them or again all for a single article. I do find it problematic that these book series tend to milk the same horror market which ‘Buffy The Vampire Slayer’ actually instigated and barely a mention of her, although oddly more attention is given in the Starbuck article.

If you’ve never seen the 2008-2012 TV series, ‘Leverage’, then apart from missing a treat, you might be caught out by Elyce Rae Helford’s piece about team member Parker. It’s odd that she doesn’t contrast Parker with her older team-mate, Sophie Deveraux, who along with Nate Ford, were ultimately parent figures to her. Parker, as portrayed by Beth Riesgraf, is a dysfunctional tomboy thief. A lot of what Helford says is open to interpretation but, of all the team, as seen in the finale, she had the most development over the series.

Joan Ormrod’s look at Wonder Woman is more a look at Artemis taking on the role than Diana Prince, mostly because of the sexualisation of her. Even so, as an Amazon, Artemis shows she had a lot to learn.

As can be seen from my comments, not all the usual suspects are covered here. That, in itself, isn’t a bad idea but there is still an assumption that you’ve seen or read all the material as well. I presume that the overall sweep will mean you have seen some of them and their interest will get you to look at the others.

I do think there is too much reliance on pointing out and describing various scenes than being more collective with the traits. Yes, there is a need to show what you’re referring to, but it can cloud the general argument provided because you’re smothering with detail. This isn’t a problem with just this book, but you do coming away wondering if you’ve learnt anything significant, which is worrying.