In some respects, you’re thrown in the deep end from the wrong direction with Simon Jimenez’ book, ‘The Vanished Birds’, and getting a different perspective as we follow the life of Kaeda on an agriculture planet where a starship arrives every 15 years to collect their crop. Presumably, some financial settlement is made although we don’t see details of that. Over the course of his life, Kaedea meets Nia, from the starship whom we don’t know her rank until much later, and turns into a regular sexual encounter. Well, until he’s really old. 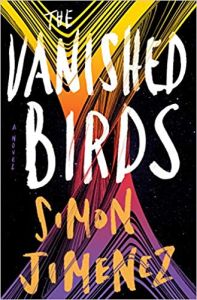 I don’t think Simon Jimenez can multiply by 15. Captain Nia Imani and her starship, the Debby, is supposed to arrive every 15 years by spacefolding but the numbers don’t tally with Kaeda ageing. I should point out that the 15 years is planet-time not Nia’s perspective.

Anyway, during one of these gaps, another spaceship crashes and the only survivor is a boy and Kaeda, now head of the community, takes care of him but agrees that he ought to go with Nia than stay with them. Now, here lies another problem, you would think that either there or on the starship, the boy would get a name but doesn’t.

Anyway, they arrive at the Pelican space station, which is pointed out with a previous biographical chapter of it and three other space stations, created by Fumiko Nakajima. These and the ‘birds’ of the title but don’t really play any part in the story other than being the name of an alliance later in the book. We see a bit of their downtime while Nia is trying to find out more about what is happening about the boy. Ultimately, she is roped in by Fumiko Nakajima to take the boy out into space for 15 years real time in fringe space when she will later meet them. Unhappily, Nia loses most of her crew because of the time away, real-time many centuries, and we don’t really get to know their replacements.

Another time-out here. A quarter of the way through this book, which is mostly build-up, with a lot of strands being dropped off along the way, a lot of it is just chucked away and not going anywhere. If this were a film, you would be throwing away most of this as supercilious. This doesn’t mean it’s not bad writing but it tends to come over as unnecessary padding and not moving the story along. There is some minimal tying in during the last chapter but doesn’t really help the plot.

There’s also a diary from one of the new crew but, for the life of me, I can’t figure out which one it is although it quickly jumps over three years before the boy decides to call himself a name: Ahro. So why did he never get a name for so long and how could they call him without one? Could you live for so long without giving someone at least a working name?

Now here’s another problem. Jimenez points out that the first person to use folding space came back in 20 years, thinking only a day had gone past. So, unless there is an undisclosed longevity drug, hibernation or using folding space herself, in relative terms, how can Fumiko Nakajima meet them in 15 years without being a very old lady herself? Ah, when we get back to her, she has a stasis-like hibernation with rejuvenation along the way so she doesn’t look her 70 years of age. It also appears she’d been woken from time to time along the way for updates. Even so, she hasn’t given herself any restrictions about visiting any part of the Alliance so she could have jumped through the time-periods without a need for hibernation. A shame that was never explored or whether other people were doing this as a means of time travel.

However, it is now 3320 and on her asteroid base full of families, many centuries into the future. Although this is going to be spoiler, a warship from the Umbai-Pelican Fleet arrives to collect their ‘intellectual property’ and mete punishment on her and her company.

As you’ll note, many times above, I stop and question these decisions, mostly because it makes little sense. Why wait so long? It would have been easier to have gone in centuries earlier, even when she was in hibernation, and done all of this. Again, author Jimenez shows some interesting ideas and then chucks it all away before we see just what is going on, let alone have much feeling towards the tragic events that unfolded.

Oh, this same warship pursues the Debby but other events unfold first. We don’t see much of the life there neither because several chapters follow Ahro. At least we find out what his specific ability is. Without getting too spoiler, it is all part of a breeding programme but considering the number of normal centuries that have passed, you would have thought that there would have been plenty of time to have done this many times over than just rely on one person. Apparently, there is something about his blood that enables spacefolding without a time differential and by draining him is literally bleeding him dry.

Considering this is so far into the future, you would think they would let Ahro have rest to build up his blood count or even cloning or several other ways to get enough of this precious blood. After all, he is supposed to be a precious ‘intellectual property’.

It isn’t as though Jimenez is a poor writer, it’s just that he’s not thinking through or developing his ideas enough to make sense, even within his own reality. His trend of throwing away his best ideas without using them could be seen as a means to portray ‘real’ life but, in story terms, is just wasteful and confusing and not moving the story along. It’s almost like he’s trying to link various short stories into a novel but not gelling. I hope he learns from this book to do better next time.