Selkies are the seal people of Gaelic, Scottish and Scandinavian folklore. While spending most of their time in the sea, they will come onto the land, shed their skins and take human form. The legends say that if a skin is found, the owner can coerce the Selkie into remaining human. Often Selkies are portrayed as female, their male equivalent are Roane. Many authors who write in the supernatural genre have a tendency to appropriate the folklore of other countries. Done sensitively and with good storytelling, this can lead to excellent fiction. 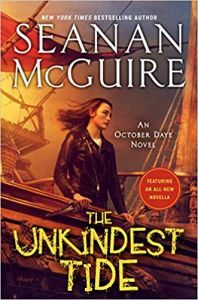 ‘The Unkindest Tide’ is Seanan McGuire’s thirteenth novel in the series featuring October (Toby) Daye. As the series has unfolded, the action has moved further away from the human world, while keeping one foot in it and more into Faerie. For those unfamiliar with the series, Toby is a changeling which, in this set-up, means she has a human father and a Fae mother. While she still retains some human qualities, she is mostly regarded as a Fae champion. She has a daughter, Gillian, who lives with her father and stepmother. Toby’s aunt is the Luidaeg, a sea witch. At the end of the previous novel, ‘Night And Silence’, Gillian became a Selkie, not through choice but because it was the only way to save her life.

In McGuire’s reworking of the Faerie mythos, the Roane were the children of the Luidaeg. At the instigation of her jealous sister, a group of humans slaughtered most of the Roane. Their children, horrified by the actions of their parents killed the murderers and brought the skins to the Luidaeg. Pitiless in grief, the Luidaeg condemned these humans to be Selkie, wearing the skins and passing them on to their children with the warning that eventually she would extract retribution by turning the Selkie back into Roane and taking away their humanity.

This can only be done now as Toby is the only one that can work the magic to cause the transformation. It has to happen as the Luidaeg made a vow that she must keep and Toby is honour-bound to take part in the ritual. As Gillian cannot take off her skin and live, she will become Roane and Toby will lose her.

While an emotionally harrowing prospect, this situation seems relatively straightforward. Others, though, see it as an opportunity to make mischief. Politics enters the equation. Toby has to overturn a coup, rescue a prince and solve a murder before she can turn her attention to the business of the Selkies.

Most of the action take place in the realms of faerie that are situated on and around the west coast of the United States. There will be purists that say that moving all these people from European folklore to the Pacific should not be permitted, especially as there are plenty of Native American myths to explore. Conversely, since most Americans are descended from European stock as they emigrate, why shouldn’t their supernatural creatures follow them? After all, people take their customs and cultures to new lands, why not they myths as well.

The answer may well depend on the quality of the storytelling, the characterisation and the skill of the author to weave the traditional into a new landscape. Fortunately, McGuire does this well enough for this European reader to want to invest time in the series.

Often an author has stories to tell about characters who don’t feature in the main plot but continue to have lives when they are not the main focus. When Toby set off to deal with the Selkie issue, one of the characters left behind was Raj, the shape-shifting heir apparent to the Court of Cats. He is young and is still learning the skills he will need to rule. At the end of ‘The Unkindest Tide’, is a novella, ‘Hope Is Swift’, recounting one of the episodes that is to shape his outlook.

While Toby and most of her household are away, Raj has the freedom to follow his own desires. One of those is hanging out with his friend Helen, who is a Hob changeling. He is however irritated by being shadowed by Cal, a lesser member of the Court of Cats but, when in cat-form, they cross a busy road and Raj is hit by a car when he pushes Cal out of the way. While in the hands of the vets, he learns a lot more about cats in general. While not a major addition to the series, this story serves to develop the character of Raj.