So here we are then, ‘The Sum Of Her Parts’, the third and final book in Alan Dean Foster’s ‘The Tipping Point Trilogy’. I’m going to have to be careful as I don’t want to give away any plot spoilers. Perhaps a short recap is in order as my reviews of the two previous books was some time ago. In book 1, ‘Human Blend’, Dr. Ingred Seastrom meets the common low life criminal Whispr, when she treats him after his latest brush with the police. Whispr is a Meld which is a term applied to those who have had their body augmented or physically changed. In Whispr’s case, he has changed to become exceptionally thin which is bonus when you are creeping up on people with the intent to rob them. Just before meeting Dr Seastrom, he has robbed and killed a person and acquired a strange metallic thread. It is this metallic thread which intrigues Dr. Seastrom as it can’t be read as other storage threads are and appears to be made of a novel metallic substance which should not exist at room temperatures. When treating a young adolescent Meld, she notices a small device embed in the patient’s head. It appears to be made of the same substance as the mysterious storage thread but vanishes before it can be investigated further. Dr. Seastrom becomes almost obsessed with trying to learn about the storage thread and its connection with the nano-sized devices she has found in some adolescent patients.

Their search for answers takes them to what was South Africa as they try to locate a secret research centre. Their attempts to do this and to stay ahead of the hired assassin Napum Molé and anyone else who has been hired to kill them. Most of this is covered in book 2, ‘Body Inc.’ Book 3 picks up where ‘Body Inc.’ left off. Our unlikely duo are still in South Africa and still pursued by Napum Molé but now rival organisations are trying to get to them before he does. It has become deadly industrial espionage.

While I thought book 2 was a bit of a filler which didn’t advance the plot very much, ‘The Sum Of Her Parts’ more than makes up for this. The changes one can make to your body with the Melding process are explored with some startling results. There are also the by-products of illegal experiments of animals, although the legal modifications to animals are quite horrific, too.

As Dr. Seastrom and Whispr get closer to their goal, they are also getting ever closer to the people who want to kill them. It is difficult to see how the unlikely duo are going to survive this as the odds seem so heavily stacked against them. I suppose it’s where a master wordsmith like Alan Dean Foster gets to show their skill as the plot takes some unexpected turns. They might be unexpected but they are consistent with the story so far. The ending when it comes is rather emotional but very satisfying.

As well as a very enjoyable read ‘The Tipping Point Trilogy’ is an interesting take on how the world may turn out in the near future. While the focus is on body melding, the world is significantly altered due to the rising sea levels. It not only changes the landscape but the social fabric of the people who have had to make some significant changes just to survive. This provides an intriguing backdrop to the tale of Dr. Seastrom and Whispr’s quest to find the answers to the mysterious thread and the nano-scale devices.

As I was reading the series ,there was a news story about heat sensitive hair dye. Apparently, the colour changes with the temperature. There are similar things in this story so while it might only be a small start it’s another step on the road to the world Alan Dean Foster envisages for us in ‘The Tipping Point Trilogy’, I’d advise you to read it so you know what’s coming, just in case he’s right.

When the Mouse eats your lunch: scifi author Alan Dean Foster on getting ^%^%%$ed by Disney (new interview). 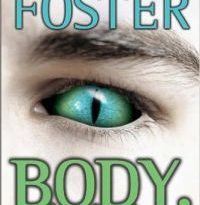