Set during the Era of Upheaval, ‘The Sundering’ is a multi-author event chronicling the adventures of Faerûn’s heroes, from those just Chosen to some of the Realms most enduring characters. Troy Denning’s novel, ‘The Sentinel‘, is the penultimate entry in the series. As such, it is suitably thrilling from beginning to end.

Like many during the Era of Upheaval, Kleef Kenric has spent his life worshipping a long-forgotten god. It is said that so long as one person carries a god in their heart, that god is not dead. Helm, The Watcher, god of guardians, could not save his father. While others accept bribes and trade favours for knighthood, Kleef stubbornly clings to the tenets of his faith – coming to the defense of those who ask, leaving his career with the city guard stalled at the rank of Topsword.  Kleef’s unswerving faith has turned him bitter.

While battling to win free of Marsember, Kleef accepts payment from a merchant in order to clear the way. He uses the gold to motivate the guards beneath his command to do the job they are already sworn to do. His guilt over the act is not easily rationalised but with priests holding up the evacuation with their theatrics and Shadovar threatening the city, he has little choice but to rally his men the only way he can.

While tracking the Shadovar, he comes to the aid of a mysterious pair, Joelle Emmeline and her short and odiferous companion, Malik. Kleef fights back wave after wave of Shadovar and Joelle and Malik flee across a bridge toward the noble house of Seasilver. They are observed from the balcony by Lady Arietta Seasilver, a young noblewoman who believes she is the Chosen of Siamorphe. Taking up her bow, Arietta joins the fight. Thus fate combines four destinies of four people trying to serve their gods.

The Sundering refers to the separation of Abeir from Toril. While the living (and sort of living) denizens of the world deal with the fallout of the Era of Upheaval – from the Great Rain to falling earthmotes to the literal upheaving of earth – the gods are battling for supremcy. Often, they do so through their Chosen. Joelle and Malik are on a quest for Sune. They carry the Eye of Gruumsh as a gift from one god to another. As such a gift would foil Shar’s plans for the Ever After, the Shadovar are keen to get their hands on the Eye. So are the orcs. The Eye is one of their sacred relics.

Their journey to the Underchasm is frought with adventure. Arietta sacrifices her family and Kleef feels he is sacrificing his principles for a woman who will never return his ardent regard. Joelle uses her god-given charm to ensure everyone follows her plan and Malik is obstinate in his deviancy. By the time the four arrive at Grumbar’s Temple, alliances have shifted many times – as has each companion’s idea of what it means to be Chosen.

It’s this last that really captured my attention while reading ‘The Sentinel’. Kleef’s struggle to defend his faith, to himself and those around him is heart-wrenching. In order to succeed on this quest, he has to do away with his bitterness and regret. When he finally does, I reached for the tissue box. Arietta’s journey is equally compelling. She has only been told she is the Chosen of Siamorpeh and as such, has taken her role for granted. This revelation rocks her ideas and ideals, and ultimately brings her closer to what she really wants to be.

I really enjoyed this book and as has happened every time I pick up a new volume of ‘The Sundering’, I am inspired to look for other works by the author. Troy Denning’s writing is accessible and easy to digest. I read ‘The Sentinel’ in two devoted sessions, breaking only for dinner. As mentioned above, what really makes this book stand out are the characters, particularly Kleef and Arietta. Their thoughts and actions were so appropriate to their situations. At no point did either feel unreal or overwrought. Malik was fascinating in his own grimace-worthy manner. Though he is not likeable, I did manage to muster empathy for him. I’m still trying to decide how I feel about Joelle. I think perhaps she is actually the most devious and unsympathetic of that pair.

The conclusion to ‘The Sentinel’ was another tissue box moment and another step forward in the world event.

‘The Sundering’ is nearly done. Only one volume remains: ‘The Herald’ by Ed Greenwood. Through all six books are linked only tenuously, I have enjoyed the experience of reading several stories surrounding the same event. Each has advanced the world narrative and each has introduced me to another, smaller world of characters. My only complaint would be the steadily growing pile of books behind me as I discover new authors whose voices I must further explore. 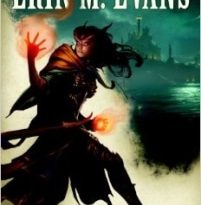