This is book two in ‘The Traitor Spy Trilogy’, the first book in the series being ‘The Ambassador’s Mission’, and the final book, ‘The Traitor Queen’. All these books have been published in case you wanted to marathon them, as I know many people prefer to do with trilogies.

We’re still following Lorkin in the Sachakan rebel encampment while he tries to learn all he can about the Traitors and the way their magic works. Sonea and the magician’s guild are still trying to find the rebel magician Skellin. This time they have to do this while keeping some students in line who seem intent on getting themselves into some very serious trouble. Essentially, this is all that happens in this book, alongside a lot of travelling and some information about the Traitors and the way they live.

This book definitely falls victim to ‘middle book syndrome’ in that it really doesn’t do much more than move the stories within it towards the climax of the third and last book in the trilogy. I have to say that although I enjoyed the writing, I did find that I got bored a lot while reading this book. There were areas of the storyline that I really enjoyed, like getting to know some of the younger characters like Anyi, thief Cery’s daughter. I am looking forward to her developing as a character in the next book as I found her to be one of the more entertaining characters in this book.

One character that I’m really not looking forward to reading more about is Lilia. Seriously, this girl needs a jolly big slap. I completely understand what Canavan was doing with her and that it was necessary but, honestly, she really was annoyingly stupid. I really didn’t enjoy the fact that she managed to be manipulated quite as often as she was. I don’t think anyone could truly be that daft. In fact, I awarded her the award for the most irritatingly naive and stupid character I’ve met in a book so far in my reading career. To put this into context, I generally read about 2 books per week. I’m hoping that her new set of friends will give her the ability to not make such daft decisions in the next book.

Another element I didn’t enjoy was that fact that, as readers, we were shown interesting bits not once but often two or three times as different people learnt the same information at different times. There had to have been a better way of doing this, I felt this was very clumsy as a writing style. Overall, I felt that this book could have been cut down to about half the size and nothing would really have been missed and the pace would have been so much better. Another slightly clumsy and I felt confusing writing style in this book was that, within each chapter, the storyline jumped around a lot. This on its own would not be a bad thing, however, there was very little to let the reader know that a big change in scene was coming up other than a slightly larger gap between paragraphs. Something a little more informative like a little picture between the scenes would make it a little less jarring and confusing.

Having said all this, I will want to read the last in the trilogy, although if the series was any longer I might not be quite so willing to continue on to the end. I would have to say I would think twice before starting another of Canavan’s series. This is probably only a series for readers who really enjoy Canavan’s work, not one to start with if you’re new to her. 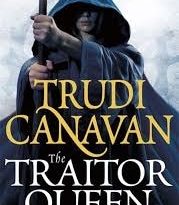 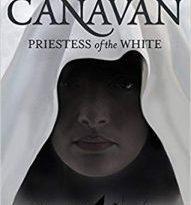