As undoubtedly one of the foremost experts on the life and works of H.P. Lovecraft, S.T. Joshi has a problem with the Cthulhu Mythos. In short, he doesn’t like it. Here’s the problem: Joshi believes that Lovecraft was a writer of great intelligence and philosophical depth, who through his short stories and novellas explored what has become known as cosmic horror. This is the existential dread that arises when man’s true place in the universe is properly understood.

On the back of this, Joshi has built up a decent body of scholarly writings and, second only to August Derleth, is the man most responsible for the persistence of Lovecraft’s reputation in the modern world. 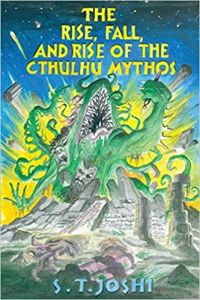 The tricky thing, though, is that for the vast majority of people reading Lovecraft, it isn’t the philosophy that matters, but the monsters and aliens in all their shocking diversity. From plushies to bedroom slippers, TV shows to board games, the Cthulhu Mythos extends its tentacles into popular culture much more deeply than any single piece of Lovecraft’s fiction. On top of that, Lovecraft’s writing has inspired generations of writers, many of whom have become very well-known indeed: Robert Bloch, Brian Lumley and Stephen King to name but three.

So, there’s a tension between the pop culture reality of Lovecraft as a literary icon and the deeper philosophical meanings that Joshi would prefer readers to focus on. This is what makes ‘The Rise, Fall, And Rise Of The Cthulhu Mythos’ such an interesting read. When I say ‘interesting’, I mean that in the same was as it’s interesting to hear out loud the thoughts of a drunk and disappointed father giving his speech at his daughter’s wedding.

A good place to understand Joshi’s approach to his subject is with the chapter on Derleth, the self-appointed executor of Lovecraft’s literary estate. Stretching across more than forty pages, Joshi entitles this chapter ‘The Derleth Mythos’, immediately making clear his argument that what Derleth created and bequeathed to popular culture, was something new, not the Lovecraft original or, as Joshi puts it himself, ‘…Derleth did misinterpret Lovecraft’s pseudo-mythology in an egregious fashion. In hindsight, it becomes astounding how Derleth could have developed so erroneous a view of the Lovecraft Mythos and propounded it for so long… to the extent that subsequent contributors to the Mythos ended up writing unwitting pastiches of Derleth rather than Lovecraft’.

This isn’t to say that Joshi is wrong. He is almost certainly correct about what Lovecraft was trying to achieve through his fiction, but the way Joshi criticises those ‘unwitting’ followers in Derleth’s footsteps is done in a remarkably high-handed manner. It is hard to argue with Joshi when he says that the difference between Derleth and Clark Ashton Smith and Robert Howard was how they used Lovecraft’s ‘generic material’. Where Derleth consistently put the monsters, aliens and forbidden books as the subjects of his short stores and novellas, Smith and Howard used them only sparingly in the background.

Where Derleth largely imitated Lovecraft, Smith and Howard were instead inspired and their fiction today looks far more original and interesting because of it. But to dismiss Derleth legacy as an editor, as Joshi does, as ‘incompetent and error-riddled’ and ‘possibly illegitimate’ is unfair given the time when Derleth was working. Had Derleth not existed, it is doubtful Lovecraft would have been read much in the decades following his death and without that crucial work in transmitting Lovecraft’s stories into the modern era, to dismiss Derleth as an ‘irrelevancy’ seems a rather risky point of view.

There’s a delicious moment in the book where Joshi complains that April Derleth, daughter of August Derleth, ‘sat on [Joshi’s] manuscript for months without making a decision’. Given the things Joshi had said about her father and his literary legacy, that surely wasn’t a surprise, but it says something about the major place Derleth’s publishing house, Arkham House, has in promoting weird fiction. Whatever else Joshi must have thought about Derleth, he seems to have been more than happy to use Arkham to get his writing out to as large an audience as possible.

Perhaps the problem isn’t so much Derleth’s merits as a writer or editor that Joshi objects to, but more that as a publisher he fostered the early careers of a number of authors for which Joshi plainly doesn’t like. A case in point is Brian Lumley, who got his career off the ground writing Mythos stories for Derleth. It goes without saying that Lumley has sold more books than Joshi ever will and whether or not Lumley writes great literature may be debated, but his success as a horror fiction writer is plainly evident. Yet Joshi can’t get past his dislike for the sort of things Lumley writes and that colours a lot of what he says in this book.

‘The problem with ‘The Transition Of Titus Crow’ and all its successors, aside from the horrendous writing that riddles them, is that Lumley has attempted to take Lovecraft’s cosmic conceptions and make an action-adventure plot out of them. The effort is doomed to failure…the true horror in Lovecraft’s work is the mere knowledge that the Old Ones exist’ is one typically damning comment thrown at Lumley. Clearly, in Joshi’s mind, ‘failure’ is whether or not a story meets his expectations as a literary critic rather than whether it sells and entertains millions. But what is really telling here is how Joshi evidently believes that only his interpretation of the ‘true horror’ of Lovecraft is the right one. If you, gentle reader or, for that matter, benighted author, enjoy the monsters and want to see cunning heroes overcome them, then frankly, you’re wrong. You’re missing the point.

Of course, there are writers Joshi likes, such as William Pugmire. Having quoted from one short story, ‘The Imp Of Aether’, Joshi says, ‘This single story is superior to the entire corpus of Derleth’s ill-conceived Mythos work’. Pugmire scores well, opines Joshi, in being ‘strikingly original’ even when inspired by a location from the Mythos. Perhaps more curious is where Joshi decides to review the contributions of one S.T. Joshi, though, even more strangely, that author’s ‘The Assault’s Of Chaos’ is described as ‘bombastic and preposterous’. For all his faults, Joshi is apparently not lacking in self-reflection!

Ultimately, ‘The Rise, Fall, And Rise Of The Cthulhu Mythos’ can’t really rise above being a very personal take on pretty much everything ever written about or using the Cthulhu Mythos. There’s nothing wrong with being an intellectual snob and there certainly are critics like Robert M. Price who write about Lovecraft in a way that draws casual readers into the world of literature by being both intelligent and accommodating. But Joshi has little positive to say about the likes of Price, who he dismisses more than once for ignoring apparently important points, because he doesn’t really want Lovecraft to be the thing it is today.

It’s hard to imagine Joshi approves of Cthulhu slippers and board games set in Arkham but instead wants desperately to elevate Lovecraft to the same rarefied heights as American authors such as Hawthorne or Melville. His problem, though, is that the interest in H.P. Lovecraft that has allowed Joshi his career is one that exists almost entirely in the world of popular culture, not academia. Joshi seems to see himself as an Ivy League professor but his audience are those who read Lovecraft purely for fun, not philosophical debate.

The bottom line is that ‘The Rise, Fall, And Rise Of The Cthulhu Mythos’ is an absolutely brilliant read, if not precisely for the reasons the author intended. It’s encyclopaedic in its coverage and nothing can be said against Joshi’s grasp of the material. He remains the preeminent historian of Lovecraft and those who were inspired by him. But all the same, this is a highly personal book that critiques Mythos writings very largely on how they fit into Joshi’s own conception of what that Mythos should be.

Perhaps he is right and what he describes as cosmic horror is precisely what Lovecraft intended his Mythos to be. But who can say for sure?

The hardback version called ‘The Rise And Fall Of The Cthulhu Mythos’. 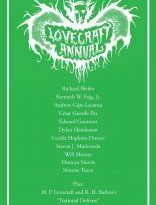 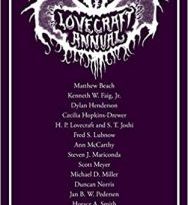 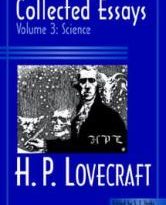 One thought on “The Rise, Fall, And Rise Of The Cthulhu Mythos by S.T. Joshi (book review).”