I have been curious about ‘The Orville’ as to being comedy Science Fiction, although it was pretty much a known of how close it was to ‘Star Trek’ when I first started watching it. From the first season’s 12 episodes, it was pretty obvious that it was supposed to be a dysfunctional bridge and engineering crew getting along with each other. There are certain homages to ‘Menagerie’ and ‘The Enterprise Incident’ from the original series and ST-TNG’s ‘The Outcast’ and switching engineers with a bridge crew, although done with a baby, as well as problems with First Contact and such.

The problem with ‘The Orville’ is it’s not really funny. I think I laughed at three things in the first season and thought it was in danger of trying too hard in that direction. As a Science Fiction show, it does work a lot better and not so predictable solutions to the problems they have. With effects, it is on par with the ‘Star Trek’ series it pays homage to. It’s very weird seeing the Orville flying in one direction and then when it receives orders to go on a mission has to fly in the opposite direction all the time but that’s about the only repeat footage used. I still wonder about their tunics looking like the Spectrum uniforms from ‘Captain Scarlet And The Mysterons’. 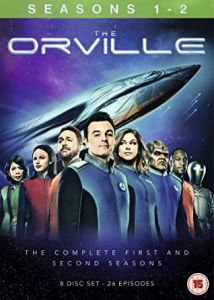 With all the extras, there seems to be some prejudice against protoplasmic life-forms. I can understand Lieutenant Yaphit not appearing at the 35 minute ‘The Orville At PaleyFest 2018’ as the stage was rather full, but he was also ignored with a look at the cast and life-forms pieces as well. Obviously some level of prejudice exists and although I think Yaphit has some inter-species oddities, especially towards the Orville’s medical officer, Claire Finn, he has yet to receive any reprimands in his record.

With ‘Ja’loja’, the opening episode of season 2, the medical officer Claire Finn seems to be unaware who the Duncan family are but she would surely have to know who everyone on board is.

The second season opening episodes seem more like a need for individual episodes based around individual characters than group efforts and missions. I do wonder if it was showrunner/lead actor Seth MacFarlane’s desire to put each in the spotlight or at least have something to go in each actor’s showreel, more so when the Orville’s security officer is replaced. Even so, by the third episode I was yearning for something more, feeling the balance was being forced in the wrong direction.

With the fifth episode, ‘All The World Is Birthday Cake’, it is rather worrying that I came up with the right solution in ten seconds what took the crew a month to comes up with. Just goes to show that there isn’t any heightened IQ in the future and no geeks neither.

Ah, when it comes to the two-parter, ‘Identities’, it becomes apparent where the budget was spent. This is the equivalent of ST-NG’s Borg. You do have to wonder that if the Kaylons could share memories, it doesn’t need Isaac to have been born later to not understand their slave status. The final two episodes dealing with time travel and how a minor change having a butterfly effect is nicely realised although I think a better twist at the end would have been to have two Dr. Claire Finns or at least merge with her earlier self as she had stepped out of her own timeline and was the only one who remembered everything.

The extras are more like snippets looking at deleted scenes, the characters of Kelly and Bortus, who must have one of the stiffest necks ever as he has to turn his body to look around and a gag reel. At 16 minutes, ‘The Orville At Comic-Con 2019’ spent 4 minutes introducing everyone. I only hope this was a highlighted section cos it was really short otherwise.

I can understand how ‘The Orville’ has developed its fanbase now, helped immensely by not trying to be deliberately funny. The thing is, the contrast in stories where there are bigger issues with where their main job is actually far better. As to the need for character stories then put them in as sub-plots than the main focus. ‘The Orville’s strongest focus is when it does larger stories.

With a third season on the event horizon, one can only hope the series will develop further. 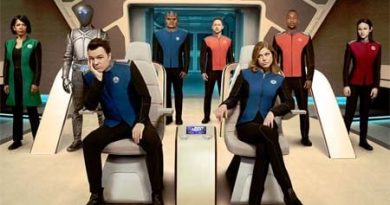 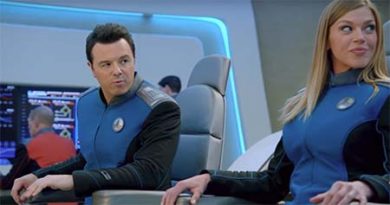