Editors John Leslie and Robert Lawrence Kuhn bring together the views of some fifty scientists and philosophers questioning…well…the universe and everything in this book ‘The Mystery Of Existence: Why Is There Anything At All’. Some things like the Stephen Hawking quote that he knows how the universe works but not why it bothers to exist is given in its entirety so you can see it in context. I think for most of us, we accept that we’re here, alive for a short time before being absorbed back to whatever we came from. Knowing why isn’t likely to change our day-to-day lives but for scientists and philosophers, it is just another puzzle that needs to be solved. We know the Big Bang happened and in the resulting discharge of matter, all the rules of the universe which we interpret as our scientific laws clicked into place. Without them, we wouldn’t be here. What caused the Big Bang? No one really knows. Was it some powerful deity that some call God? Who knows? I tend to just think it was a lucky accident and that if I wasn’t alive here, then chances are I would be alive somewhere else.

If anything, considering Professor John Leslie’s own preferences, there’s a tad too much religion and from my perspective, I wish he had or produced better arguments from people as to why that would be possible, let alone better proof to an existence of a deity. I should point out that the atheist and Muslim scenarios are given some consideration as well but are equally vague when it comes down to suggesting that we are part of some deity’s plan which is probably too profound to understand.. If you want to extend your thinking in those lines, just what kind of plan are we supposed to be part of? I mean, wouldn’t you expect to do more than just hang around on a single planet for eternity?

It’s hardly surprising that some Science Fiction scenarios are presented but acknowledged as not happening yet. The multi-universe scenario and what would happen if our science laws weren’t just so has still to have any proof to back it up being among them. I mean, if matter and energy falls into a particular pattern, then the laws of nature as we see them just takes place still seems pretty viable.

It can also be hardly a surprise that none of the illustrious people in this book have any answers at all and I have to confess that there is a lot of hot air as they try to seek the meaning of life, although no one offers ‘42’ as the answer, even if I think that’s only an error message number. If anything, your guess would be as good as theirs.

In many respects, this is a healthy read until you come to Robert Lawrence Kuhn’s entry whose number of pages is equal to be number of pages devoted to his footnotes and where you’re almost certainly not going to care if there is a universe of nothing by trying to juggle the two together.

Reading how the various people here have tried to put their own mark on existence, whether by religious belief or even string theory isn’t likely to change anything but it should give you some food for thought. If there was a choice between being nothing and something, I’d sooner go along with the latter because dwelling on the former won’t change anything. 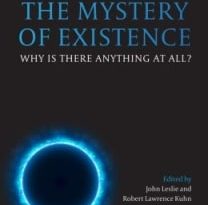