It’s hard to believe that the original ‘Planet Of The Apes’ was 60 years old when this book, ‘The Making Of The Planet Of The Apes’ was released in 2018. Fortunately, its author, J.W. Rinzler, was alive when he saw it the first time around. He also had access to Frazer Heston’s father’s notebooks that were written at the time. From what Frazer says about his father, Charlton Heston, there were notebooks taken with all his films and someone does need to see what else can be gleaned for not only his SF but other films at some point. 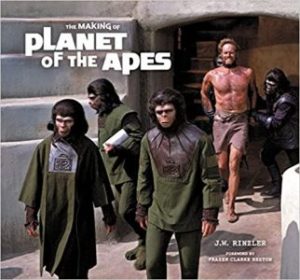 Oddly, Chuck Heston wasn’t Arthur P. Jacobs’s first choice for Thomas who became Taylor but some chap called Marlon Brando. Indeed, following the list of people approached for both cast and production seems to have gone through a lot of Hollywood’s A-list. Getting people attached to films to get them done is still pretty common in Hollywood and I doubt if we’re always this privy to the choices as shown here. I liked Heston’s comment that SF roles are divided into monsters, pointers, and fugitives but not noting he was playing the third type in PotA.

It should hardly be surprising that this book takes off when John Chambers begins to develop the ape prosthetics. It was also interesting to note that they did want to know how some of the problems were solved in ‘2001: A Space Odyssey’ but as it was already being filmed Kubrick deemed it a conflict of interest and they were declined. Chambers’s real problem was articulation for speech and I doubt if Stuart Freeborn’s ape masks would have worked for that.

It’s interesting reading how actors Roddy McDowall and Kim Hunter learned how to adjust to the claustrophobic effects of the ape prosthetics. Outside of ‘Star Trek’ and the upcoming ‘2001’ up to that time, I can’t remember many if any films outside of monster movies that had so many characters under such make-up so really was a whole new ball-game.

With access to the Charlton Heston Archive, it was interesting seeing how the actor changed his lines to keep the intent and where even the director and various scriptwriters had problems. It was also surprising to discover the famous dialogue, ‘Take your dirty hands off me, you damned monkey’ was his.

There is still the mystery of who was the 80 year extra who played the dead Stewart was still not resolved.

Rather oddly, although there is a page of text about Ape merchandise, the photo itself is a postage stamp. Although that might be down to the number of pages left, considering how film merchandise sales are a supplement to cinema seats, it seems to pity that in such a detailed book that more about this wasn’t covered.

Oddly, until Sammy Davis Jr pointed it out to the producers, none of them realized PotA was about racism. If you want something for quizzes, the rocket noise in crash-landing is the same as the 1966 batmobile leaving the Batcave.

Even so, if you want a book that tells you all about the original 1968 film, then this is the one to own and has been a fascinating read with lots of production photos in front of and behind the camera and well worth investing in.

2 thoughts on “The Making Of The Planet Of The Apes by J.W. Rinzler (book review).”