It’s hard to believe that ‘The Magazine Of Fantasy & Science Fiction’ has been in existence for over seven decades and yet the September/October 2019 issue marked the 70th anniversary of its first publication.

To celebrate this impressive achievement, editor Charlie Finlay filled the magazine with some seriously heavyweight content, including Michael Moorcock’s debut piece for them, Gardner Dozois’s last piece of fiction, submitted shortly before his sad death in early 2018 and a fascinating retrospective on the magazine’s history, written by octogenarian SF Grand Master Robert Silverberg. 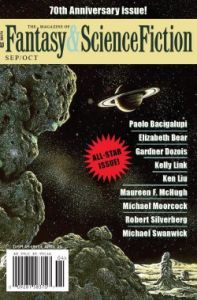 The magazine starts as it means to go on with a beautiful cover, showing Saturn from one of its rocky moons, painted by world-famous space and SF artist David A. Hardy. Inside there are four novelettes, eight short stories, two poems, two cartoons and eight articles. I’ll cover a cross-section of them all.

The opening story is a fantasy novelette by World Fantasy Award winner Kelly Link. In ‘The White Cat’s Divorce’, an American billionaire tries to cheat the ageing process by marrying ever younger wives and resorting to increasingly extreme health and fitness regimes. Unfortunately for him, the three grown-up sons from his first marriage all still live in his mansion. Their constant presence makes a mockery of his pretence to youth from the moment they start to look older than their father. His solution is to send them away for a year, having invented a quest for them to complete. Whichever of them brings home the cutest dog to be their father’s faithful companion in his dotage will inherit the entire estate.

The story focuses in on the adventures of the unnamed youngest son, whose American road-trip in pursuit of the perfect pooch has a rather extraordinary outcome. This is a fantastical fairy tale which, on one level, makes no logical sense whatsoever. Link’s gift is to tell the story in such an engaging way that you can’t help but want to know what happens to the characters through every twist and turn. I found it a hugely enjoyable start to this special issue.

In ‘American Goldmine’, multiple award winner Paolo Bacigalupi explores a possible near future for the broadcast news media in America. The amusingly-named Heidi Hallenbach is an extremely ambitious news anchor on a major network who will say anything in pursuit of higher ratings. While half her audience idolise her, the other half despise her. Just so long as they keep watching, she couldn’t care less. What will she do, though, when the online abuse shifts to the real world?

I found this a powerful story which highlights the destructive power of the ‘shock jock’ type of TV host but broadens this point out to recognise that such people only exist because we, the public, seem eager to engage with their agenda of anger and division. In Hallenbach, Bacigalupi has created a genuinely monstrous character who wields enormous power with a total lack of conscience. Scary.

Extraordinarily, ‘Kabul’ is genre giant Michael Moorcock’s debut story for MoF&SF. In this novelette, he takes us to what’s left of Afghanistan in the aftermath of a regional nuclear war between India and Pakistan that has remodelled the geography of many of the surrounding countries. Captain Tom Dubrowski is a former Russian intelligence officer now acting as interpreter and scout for a ragtag multi-national group of soldiers, aid workers and others, all hoping to find safety in Kabul. However, when they arrive, Tom is brought face to face with his past in a way he couldn’t possibly have anticipated.

Moorcock has written a stunningly well-realised tale of what might follow a partial nuclear apocalypse. Humanity is surely on its way out, yet our best and worst characteristics continue to rear their heads at every available opportunity, highlighting what we’ve lost and why it’s such a tragedy. There is beauty and horror here in equal measure, as is entirely to be expected from Moorcock’s pen. A story I will revisit, I’m sure.

In ‘Little Inn On The Jianghu’, Canadian writer Y.M. Pang parodies traditional Chinese adventure stories, considering what it might be like to be a typical poor innkeeper whose premises are repeatedly trashed when seemingly superhuman martial artists decide to settle their scores there. Inn owner Cheng’s attempt to get his revenge is hilarious throughout, with a conclusion that’s simultaneously satisfying and full of regret.

Although Amanda Hollander is a professional librettist, ‘Madness Afoot’ is her first published prose story. Told in epistolary form, it is a short and witty retelling of the Cinderella folk tale from the perspective of Princess Orsolya, clever and worldly sister to an idiot prince who is trying to find the beautiful maiden he danced with at a recent ball through the shoe she left behind. The princess is more interested in trying to address a recent grain shortage and the resultant public starvation, although the aristocrats running the government seem no more bothered about this than the rest of her family. Hollander uses her fairy tale to point out some hard economic and political truths of eternal relevance yet does it in an engaging and amusing way.

The last fictional piece I’ll highlight is ‘Homecoming’ by legendary editor and author Gardner Dozois, written not long before his death. It’s a short story about the final adventure of an ancient mage called Entwaine. I won’t spoil it by revealing the plot but would simply urge you to seek out and read this wonderfully understated story for yourself. The writing is filled with sadness and regret, yet there is also beauty, humour and the creation of new life alongside the ending of the old. An entirely fitting way for a brilliant writer to sign off his career.

Turning from prose to poetry, Jeff Crandall’s ‘Halstead IV’ takes the cumulative tale structure of the traditional British nursery rhyme ‘This is the house that Jack built’ and uses it to tell a tale of cruel slavery implicated in the building of the titular planet. While the subject matter of the tale is thoroughly depressing, the poem itself is inventive and exciting to read and re-read.

The first non-fiction article in the magazine is the retrospective by Robert Silverberg that I’ve already mentioned. Called ‘Three Score And Ten’, it’s an illuminating essay on the history of the genre in general and MoF&SF in particular. If you Google it, you’ll find it’s openly available to read on the magazine’s website. I’d encourage anyone interested in the early history of the pulps to look it up.

Immediately following the Silverberg, Charles de Lint does what he does so well, filling his regular ‘Books To Look For’ column with six insightful reviews, preceded by his own reflections on the magazine and his engagement with it. Again, you can read this on the MoF&SF website, along with the majority of the amazing 225 columns de Lint has written for the magazine since 1994.

In his regular ‘Science’ column, Jerry Oltion tackles the question of realism in Science Fiction films. How credible does the science have to be? This column intrigued me greatly. As a former physicist, I’d love the answer to be ‘highly credible’, with recent films like ‘The Martian’ being rewarded as a result. However, as a realist, I think the answer is actually ‘not credible at all’, given the low level of scientific literacy of the film-going public, alongside the wider point that, ultimately, films are entertainment above anything else. Nonetheless, it’s a great question to debate.

The final column I’ll talk about is Paul Di Filippo’s semi-regular ‘Plumage From Pegasus’. This one is a purported review of a scholarly edition of a previously undiscovered SF novel, supposedly written jointly by H.G. Wells and Jules Verne in 1901, when Wells was in his prime while 73 year-old Verne had but four years left to live. Di Filippo uses this intriguing idea to explore the two broadly different approaches to early SF which these great authors represented, one focused on hard science and engineering, the other more interested in SF’s power as allegory. As ever, the column is entertaining and thought-provoking at one and the same time.

I may be late to this particular party but the 70th anniversary issue of ‘The Magazine Of Fantasy & Science Fiction’ is a tour de force, amply illustrating why the title has endured for seven decades when so many of its competitors have fallen by the wayside. The mix of new SF and fantasy stories, at varying lengths, accompanied by poetry, articles, cartoons and gorgeous cover art, is a constant reminder of the reasons why I love genre fiction, particularly at sub-novel length.

Every issue of MoF&SF can be guaranteed to include at least one piece that will make me see the world anew. This particular issue includes several. I’d urge you to get hold of it, read it from cover to cover and then subscribe if you don’t already. You won’t regret it.

Artist David A. Hardy emailed in:  That my first cover was in 1971 and that was also of Saturn from one of its moon, in this case Titan, but with a Sphinx sitting in a lake of liquid methane. 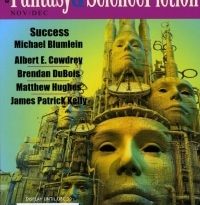 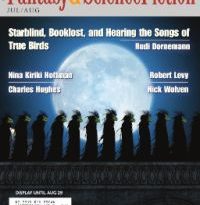 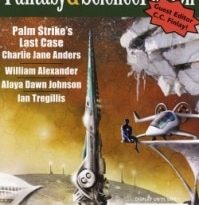