The editorial team at ‘The Magazine Of Fantasy & Science Fiction’ are rather good at commissioning interesting cover art. With the July/August 2019 issue, they’ve outdone themselves, at least for a pulp SF fan like me. The picture, ‘Robots Invade!’ was produced on spec by Mondolithic Studios, rather than to illustrate a story already accepted for publication.

Instead, editor Charlie Finlay has chosen to open and close this issue with SF short stories whose plots are closely related to the image of invading robots presented on the cover. Those two stories were amongst my favourites in the magazine, so I’ll cover them first. 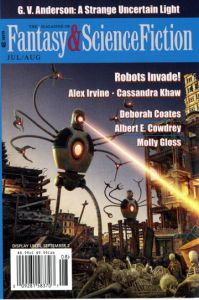 Cassandra Khaw’s ‘Mighty Are The Meek And The Myriad’ takes us to a future London some time after a ceasefire has brought to an uneasy halt a devastating global conflict fought between incredibly deadly warbots. The pragmatic and thrifty British have decommissioned their robots and removed all the lethal appendages and repurposed them as public service droids performing useful if dull tasks across the country. As the story opens, one such robot helps to ensure that Harold, a young and ambitious US diplomat, is able to squeeze onto a heavily crowded tube train so that he’s only slightly late to a tense meeting with senior British diplomat Henrietta, an ex-army officer who is bored rigid by the predictably tedious diplomatic games being played between the former warring powers.

She longs for the greater clarity that the previous war provided. Can she get through another day of managing the simmering tensions between the UK, US and others without, for example, shooting Harold for arriving late again? Khaw has produced an excellent military SF story which mixes equal parts of world-weary cynicism and insightful ideas about the potential problems of decommissioning intelligent warbots and giving them menial peacetime jobs instead. The dry humour with which Khaw comments on the love-hate relationship between Britain and America provides the icing on the cake.

Closing the magazine, ‘The Legend Of Wolfgang Robotkiller’ by Alex Irvine takes us to what’s left of New York after a global invasion by killer alien robots that are very clearly modelled on those in the magazine’s cover image. Most of humanity has been exterminated but since the robots’ disintegrator rays only destroy soft organic matter, the few survivors are constantly reminded of their reality by the countless human skeletons that litter the city, lying wherever they met their doom.

It seems like a hopeless situation, except for the folk rumours about a saviour called Wolfgang Robotkiller. Is he real or just a myth? Starting from the same source of inspiration as Khaw’s story, Irvine’s one maps out very different territory, focusing on the question of how people could keep themselves going under such apocalyptic circumstances. When all hope seems lost, perhaps the invention of new myths and legends might be one answer? Irvine illustrates this beautifully, bringing energy and excitement to what might initially sound like a pretty depressing plot idea.

The other story I absolutely loved in this issue was G.V. Anderson’s ‘A Strange Uncertain Light’. This novelette is set in Northern England, a year before the outbreak of the Second World War and tells the story of Anne and John, a couple who have eloped after Anne’s father refused to give his consent to her marrying a much older man she’d only just met. Both are damaged. John is an alcoholic, unable to cope with survivor’s guilt after he and his two brothers all got sent to the same battle in World War One and he was the only one to walk away alive. Anne, on the other hand, can see ghosts, so is thought of as weird and generally shunned at home.

Unfortunately for her, the hotel John has chosen for their honeymoon had a shady past a century earlier, so it’s not long before she starts seeing strange and alarming visions from the mid-nineteenth century. Is their married life doomed almost before it starts? This excellent story initially confused me, due to using two intertwined narratives separated in time. However, once I realised what was going on, Anderson’s approach worked well, with the two storylines counterpointing each other nicely. The piece is brought to life beautifully by all the period detail that’s included, while Anne is a deeply sympathetic protagonist and the ghosts come across as authentically spooky.

There were another two stories I enjoyed almost as much as these three. Albert E. Cowdrey has written several previous stories for MoF&SF featuring the psychic investigator William Warlock. The latest in this series is ‘The Legacy’, a novelette which sees Warlock’s ‘niece’ Maggie (actually the orphaned daughter of a woman who used to work for him, until her untimely death from cancer) inherit a huge mansion in West Virginia from her estranged father, a billionaire whose fortune was ‘allegedly’ acquired through not wholly legal means. However, there’s a catch. To inherit the mansion, Maggie will have to live in it full-time for the next two years. Warlock finds this condition odd, so visits the mansion and which he finds even odder. He therefore warns Maggie to think carefully.

She, however, can’t wait to own a mansion and moves in immediately. It’s not long before Warlock’s concerns start to seem fully justified. Will he be able to make Maggie see sense before it’s too late? I loved the way that Cowdrey developed the new character of Maggie in contrast to Warlock, someone that regular readers of the magazine will already be familiar with. The supernatural speculations make the story endlessly intriguing and the conclusion is deeply satisfying.

‘Nice For What’ is an interesting SF short story from Dominica Phetteplace. It’s set in the near future and focuses on young and attractive social media influencer Luliana, who uses her public profile to promote an expensive cancer treatment in return for having her own aggressive cancer treated for free. Her problem is that the treatment is as aggressive as the cancer and, though that makes her chances of survival much higher than for rival treatments, it leaves her constantly exhausted and looking like death warmed up. Not ideal if your job is to appear on social media all the time, looking wonderful.

I was hugely impressed by what Phetteplace did with this story. She’s careful to remain neutral over the moral rights and wrongs of the various different players. Are the pharmaceutical company evil for making Luliana sign such a mercenary contract or are they simply trying to recover the huge investment they’ve made in creating a highly effective treatment? Is Luliana an enterprising young woman, just trying to save her own life or a dubious con artist willing to promote any old rubbish to her followers if it makes her healthy and rich? For once, the author leaves us, the readers, to make up our own minds.

Turning to the issue’s articles, two pieces stood out for me this time. Paul Di Filippo’s irregular column ‘Plumage From Pegasus’ explores the issue of self-improvement books and apps with typically dry humour, while Michelle West’s column provided detailed and insightful reviews of several new novels.

All in all, the July/August 2019 issue of MoF&SF provides a strong mix of SF and fantasy stories, interspersed with several interesting and amusing columns. Another excellent edition of the stalwart title, just ahead of the 70th anniversary issue, which I’ll review next. 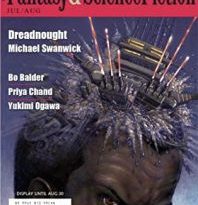 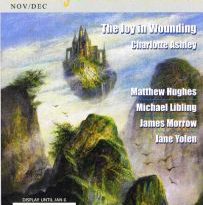 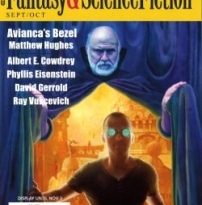