There are so many riches in an issue of ‘The Magazine Of Fantasy And Science Fiction’ that it’s hard to know where to start. I’ll follow my usual policy and go in the order of the contents page, beginning with the novelettes. Fate or fortune arranged things so that I read ‘Among Friends’ by Deborah J. Ross on the same day I watched the film ‘Amish Grace’ on the television. The film is about Amish people coping with a school massacre. ‘Among Friends’ is a touching tale of Quakers trying to help slaves. I highly recommend both but I’ve always had a soft spot for the more gentle versions of Christianity.

Thomas Covington is a Quaker in pre-civil war Delaware, a border state where there are strong opinions held both for and against slavery. When he encounters a runaway slave called Nat, he feeds and takes care of him. Then the slave catcher comes with a warrant to search Tom’s home and barn. The slave catcher is a very odd fellow indeed, it turns out, but I won’t spoil the surprise. Suffice to say it’s an excellent historical fantasy of the kind that this magazine frequently provides. Ross might want to expand it into three enormous novels called ‘The Chronicles Of Thomas Covington’ to get the most mileage from the character. I hope she doesn’t.

Next up is ‘Solidarity’ by Naomi Kritzer, the latest episode in the on-going saga of Beck Garrison and the troubles she faces on her Seasted home. The Seasteds are a group of artificial islands set up by rich people tired of government interference. There is not much law on most and virtually none on a couple. Workers rights, as you might imagine, are not a priority. Having stood up for the oppressed masses, Beck has been kicked out of the family home by her father, a rich big shot. She finds that rooms are expensive and hard to get when daddy is someone most folks don’t want to offend and she ends up in the lower levels of the Seasteds – a bit like ‘Down Below’ in ‘Babylon 5’ – trying to foil a plot to wreck the funeral of a union activist. In values and writing style, Naomi Kritzer reminds me of early Heinlein, no bad thing. She has strong plots and a clean uncluttered style. I look forward to more from the Seasteds.

‘The Assassin’ of Albert E. Cowdrey’s novelette is one Andrew Walden Emerson III, who, as you might guess from the name, hails from New England, USA. Andy is on a mission to kill the president of the world and it’s the second time he’s tried. The president was elected after the war and almost immediately used emergency powers to make himself dictator, an old, old story. This is a cool tale of tough deeds by cynical people but with a touch of sentiment, too. I liked it very much. Cowdrey often writes humorous stories and there is a hint of that now and then. Our well-educated hero notes that enlisted men ‘use the f word as noun, pronoun, adjective, adverb, preposition, conjunction and interrogation.’ Action movies have taught many people to speak thus. The rest say ‘like’ every other word and describe everything as ‘amazing’ as though there were no other superlatives in existence. It gets you down. Happily there is a rich vocabulary evident in every page of ‘Magazine Of Fantasy And Science Fiction’.

‘The Lost Faces’ by Sean McMullen is another historical fantasy, also dealing with slavery but this time set in ancient Rome. As with the Quaker story, it resonated nicely with my other media intake because I have just finished ‘Rubicon’ by Tom Holland, a superb history of the fall of the Roman republic and had preceded that with the second volume of ‘The Cicero Trilogy’ by Robert Harris. I am therefore soaked in all things Roman.

The scene is that ancient empire, ten months into the reign of the emperor…ah, but that would be telling. Gaius Maximus Secundus is a wealthy merchant, owner of fifty ships and a spectacular villa in Ostia but he is dissatisfied. He wants posterity to remember his name. Marcus Foldor is a slave catcher, the best in the world. Gaius shows him various wonders and reveals that they were all conceived by a slave girl from the east who has now run away. He wants her caught. Foldor goes after this formidable lady, but things don’t turn out as planned. This is an excellent fantasy – or is it Science Fiction? – with a neat ending. Valde Commendatur!

So to the short stories. I will abandon the contents page and order them by merit, clearly not objectively as it‘s all a matter of taste. My favourite, because I like readable and lightly humorous stories, was ‘The Trouble With Heaven’ by Chet Arthur. Charles Adams-Morgan is an ageing ambassador who is sent to Ambrosia for his last, pre-retirement posting. It is Earth’s poshest residential satellite, rich people circling the globe in the ultimate gated estate. The big issue on Ambrosia is the servant question: droids or humans, which is best? The Ambassador soon finds that his main duty is to go to functions, balls and soirees where the rich gather to discuss the servant problem. Complications occur due to a reporter, a rebellious technician and a hedonist hermaphrodite. It’s all jolly good fun.

Next best was the much grimmer ‘Code 666’ by Michael Reeves. Jack Mobley wakes up in an ambulance with a pain in the neck and his partner Claire beside him. He and she are paramedics and his ambulance has been in a nasty road crash. Jack was a good driver but Claire was the better paramedic and had mentored him in his early days. He had soon developed the thick skin and black humour necessary for the job. Despite a slightly obscure ending, this story was made good by that lively prose which, as Raymond Chandler pointed out, Americans do so well.

‘What The Red Oaks Knew’ by Elizabeth Bourne and Mark Bourne had the honour of the very nice cover painting this issue so clearly the editor liked it or at least thought it made for good visuals. Jimi Bone steals a car with something in the trunk and hightails it for Arkansas. He meets Pink, a girl selling bone and feather knick-knacks at a fair and they go off together to Red Star, a place in the Ozarks. Midas lives there and he owes Pink’s daddy a favour, so they can hang out with him for a while. This was a wild nature/Chinese fantasy involving wood-lore, dragons and other kinds of magic. A polished piece of work and quite enjoyable.

‘The Boy Who Drank From Lovely Women’ is by Stephen Utley and is another historical fantasy. Our hero is the wastrel son of a rich merchant, born in 1780 in Paris, who spent his time drinking and wenching until daddy sent him to join the army. He was shipped to the West Indies to fight Toussaint L’Ouverture in what is now Haiti and maybe, he’s not sure, he was cursed with immortality there by a black slave woman. Stephen Utley writes nicely but inclines to the slice of life tale without a very definite ending. A lot of people like that but I prefer a stronger story, as dished up by Naomi Kritzer and Albert E. Cowdrey. On the plus side, it’s quite amusing and the history is accurate.

Travel to the stars, it seems, will depend on slowed down animation rather than suspended animation. The heroine of ’The Long View’ by Van Aaron Hughes finds a way to slow the metabolism of humans with the right cell structure so they can get to other worlds. She goes along for the trip, with unexpected consequences. This is classic SF, taking one scientific development and exploring it’s consequences in human terms. A good idea, nicely handled but somehow the story didn’t quite sing and dance for me. Neither did ‘The Cave’ by Sean F. Lynch, about a father and son who go into a cave where time behaves in strange ways. Possibly it was a bit too long. A shorter plot might have delivered more efficiently on the slight premise.

That said, even the lesser stories in ‘Magazine Of Fantasy And Science Fiction’ are pretty darn good and reading any of them is not time wasted. If there isn’t a strong plot there’s nice writing. If there isn’t fine writing, there’s a good plot and sometimes you get both together in a real masterpiece. There are also interesting book and film reviews and more satirical fun from Paul Di Filippo in ‘Plumage From Pegasus‘ and in ‘Curiosities’, Richart A. Lupoff brings the attention of a new generation to the works of Stephen Leacock, the Canadian humorist from days of yore. All in all another quality issue of this venerable and respected magazine. 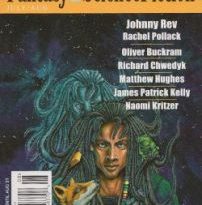 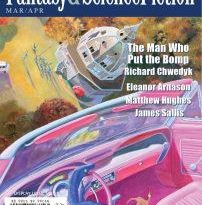 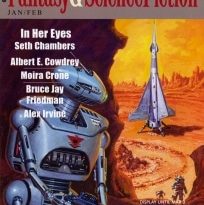