I quite like books that take cutting edge technologies and extrapolate them to provide an interesting slant on what could be. Michael Crichton is a past master of this and it’s the approach taken by Tom Aston in ‘The Machine’. The hero of the piece is Ethan Stone, an ex-SAS killing machine who has gone over to the dark side to become a Professor of Peace Studies. The cutting edge technology is provided by SearchIgnition’s founder Steven Semyonov. Someone who it has been said has extra-terrestrial qualities, including a vast intellect. By the way, SearchIgnition is the company behind the leading edge search engine (a’la Google).

Things start to get interesting when Semyonov resigns from his position at SearchIgnition and takes a major shareholding in the Chinese firm ShinComm. He then goes one step further by investing his entire fortune in New Machine Research Corporation, a subsidiary company of ShinComm. Taking up residence in China is simply the icing on the cake and adds to Semyonov’s mystique stoking the rumours even more.

Ethan Stone’s path crosses with Semyonov’s when a video emerges of the effects of a new type of weapon. The innocent villages and the on-screen death of Stone’s friend are enough to prompt him to investigate. It appears that New Machine Research is producing the new weapons. The rest of the book chronicles Stone’s investigation as he is drawn inexorably towards Semyonov and the mysterious machine. While someone tries to kill Stone, he has to sort the facts from the fiction and not just about Semyonov and the Machine but about everyone he meets.

This is quite a good tale with some interesting ideas which is spoilt by very poor editing. There are typos, grammatical errors and continuity errors in the Kindle edition which should not be there. The ending is also rather weak leaving so many loose threads it can’t really be called an ending. Aaston clearly has talent but desperately needs a good editor. This book could be so much more with a good revision. It makes me wonder if the Kindle version is just an early rush of the paperback version. 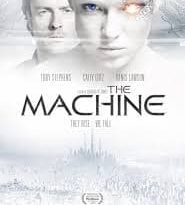