‘The Lost Adventures Of James Bond’ is a journalistic investigation of the James Bond stories that are no longer on obvious display in the media, ranging from screenplays that were never filmed to comicbooks and television series that have been lost in the mists of time. 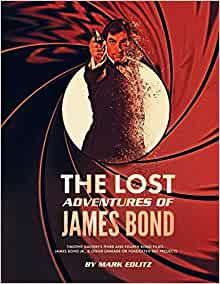 I suppose a few old eccentrics still read the books but James Bond is essentially a movie phenomenon now and author Mark Elditz begins by investigating screenplays that were never made. He has a particular interest in Timothy Dalton’s third and fourth Bond films, that is films that would have starred Timothy Dalton if they ever did them. This section has in-depth plot summaries and interviews with the writers whose scenarios were never produced. Screenplay writers have been extremely well paid since the days of F. Scott Fitzgerald but their efforts are often cast aside or so utterly changed as to be unrecognisable. Raymond Chandler wrote a good essay about it.

Take the money and run is a better philosophy in Hollywood than some desperate pining for artistic satisfaction. The screenplay summaries are not great reading being the usual Bond mix of exotic locations, car chases, combat, beautiful women and so on. Fun on screen but not to read. The interviews with writers were often interesting. Most of them have had other successes so the failure to get their James Bond onto celluloid doesn’t rankle too much. That’s showbiz, kids.

There was a ‘James Bond Jr.’ animated television series, now lost, that seems to have been truly awful and some novelisations of its less terrible episodes but even the author admits they weren’t great. Interesting trivia but not something to seek out.

Section 4 of the book focuses on lost James Bond in print which is more my cup of tea. In particular ‘The Secret History Of Bond Comics’ for ‘there are more original James Bond stories told in comics format than in any other medium’. That’s according to Alan J. Porter, author of ‘James Bond: The History Of The Illustrated 007’.

There are many different versions of James Bond comics as they vary according to the writer, artist, venue in which they appeared and country of origin. The oldest appeared in the British newspaper ‘The Daily Express’ back in 1958 before the first film. They adapted Fleming’s books at first and so kept that darker feel that went with the original stories. Later, they featured new stories by writer Jim Lawrence who tried to develop a more rounded character for James Bond and also introduced some of the gadgets that later made it into films.

‘The Daily Express’ published a total of fifty-two original and adapted James Bond stories, many of which they are still available in collections from Titan Books for a reasonable price. For an unreasonable price, you can buy Porter’s favourite James Bond comics which are ‘Permission To Die’ by writer/artist Mike Grell and ‘Serpent’s Tooth’ by Doug Moench and Paul Gulacy who cut their teeth on the spy genre doing ‘Shang-Chi: Master Of Kung Fu’ at Marvel Comics.

James Bond comics didn’t succeed in America until Ian Fleming Publications made a deal with Dynamite Comics in 2014, which led to writer Warren Ellis and artist Jason Masters doing gritty modern stories. Foreign oddities include Japanese Manga versions and a Chilean strip which appeared in ‘Zig-Zag’. Also recommended but probably unobtainable are ‘Shattered Helix’, ‘Silent Armageddon’ and ‘Light Of My Death’ from Dark Horse comics.

For those interested in the many James Bond novels penned by an assortment of often distinguished writers, there is a useful appendix at the back of the book which also lists every film, television and radio production.

James Bond has become like Sherlock Holmes, Batman or Superman now, a sort of archetype onto which each writer fits his own particular ideas while maintaining the basic characteristics of the original. The most popular James Bonds are those in the films which change slightly with each actor. Also, the character changes with the times so the original is now seen as sexist, racist, misogynist and so on and on and on.

Overall, a well-researched, readable and mildly intriguing look into the many and varied aspects of media James Bond. My eBook review copy of ‘The Lost Adventures Of James Bond’ was perfectly accessible but I imagine this works best as a coffee-table book, one to dip into during the commercial breaks next time a James Bond film is repeated on the telly, ie most Sunday afternoons.