The second issue of The Intrinsic’ comic starts where the first edition left off. Ishmael Stone (Philosopher Rex), his accomplice Blind Jack and the two new recruits are being attacked by a demonic hoard from another dimension. Given that the new recruit Tori was until late in the first episode a dancer, it’s not surprising when she decides it’s all too much to take and makes a break for the door, hotly pursued by her security guard boyfriend. As we bring a closure to Chapter 1, things look bleak for the outnumbered and surrounded Ishmael Stone and Blind Jack.

Chapter two: Hope starts on page 5 with the welcome arrival of the rest of the team to help save the universe. This brings me to the biggest gripe I have with this comic series; there is an implicit understanding that you, the reader, are familiar with all the Arcana Studio comic book characters. I’m not, and the only one I can recognise is Kade. We do learn that the big chap with the Horn’s is called Kore and Kade’s name is mentioned but as for the others, I presume we will need to read more issues of ‘The Intrinsic’.

The arrival of the rest of the gang allows them to get rid of the demonic hoard and catch up with Tori and her boyfriend. It seems she has had a strange encounter with a character called Xur Xet Tsej which Ishmael Stone sees as a bad omen. The last three pages are given over to the arch-villain Apollyon and help to fill out our understanding of what is driving him. This brings an end to Chapter 2, which might imply that hope was brief. There are a couple of pages of full page poster drawings and then on the inside back cover are advertisements for four Arcana comics whose characters are appearing in ‘The Intrinsic’ with a full rundown of the character! Hurray!

Seriously though, after reading # 2, I can confirm that the story is progressing nicely and the artwork retains the quality shown in the first edition. The team remained largely the same with the writers Sean Patrick O’Reilly, Casey Jones and Erik Hendrix with Allan Oterd doing the pencilling. The colorist for this edition was Chandran Ponnusamy and EriK Hendrix joined by Amanda Hendrix for this edition did the letters.

I’m looking forward to The Intrinsic # 3 and Chapter 3 ‘Baptism By Fire’. 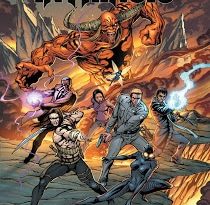