‘Clockwork Angel’ is the first book in ‘The Infernal Devices’, a new series by Cassandra Clare, set in a steampunk world. Basically, this means that it’s set in a Victorian-esque England with additional urban fantasy and technological elements. In this book, Tessa arrives in London to live with her brother, Nate, after her grandmother, with whom she was living in America, has died suddenly. Things don’t go according to plan and she is whisked away from the dock by Mrs Dark and Mrs Black. With names like that, it’s obvious things are going to get ugly. These two harridans seem to have some knowledge about Tessa that even she doesn’t know about herself. Essentially, Tessa has a power that enables her to touch an object and then change her appearance to that of the owner of said object. As you can imagine, this is a very useful piece of magic that could be very valuable to an evil genius…hence the book.

I’m a lover of steampunk as a genre, I love the juxtaposition of the Victorian elements with the more modern ones. For example, the way that the women and treated compared to the way they behave, it’s great to see them getting stuck into fights as well as the men. I also enjoy the way the urban fantasy elements fit into the Victorian world. It feels completely natural that vampires should exist then simply because of their elegant and mannered ways. It’s hilarious the way the women in particular have to be so gentile and lady like wearing gloves at all times and carrying parasols. However, no-one ever said that your parasol couldn’t hide a set of super-sharp knives, did they? Not sure if they cover that in etiquette guides. This politeness is certainly a very different way of presenting what is otherwise an urban fantasy novel and it sat much better with me.

Clare seems to have created quite a large amount of new terms for the reader to learn during this book eg downworlders – paranormal creatures or those with powers of some nature; Pandemonium Club – a group of downworlders and humans out to gather as much power as they can; mundane – humans with no powers, etc. It would be useful to have some kind of list of these in the back or front of the book to refer to as they are pretty much thrown into the book will-nilly, with only a short description if at all.

Ooh, there’s a cliff-hanger ending, not my favourite way to end a book but definitely something that makes you want to dive into the next book as soon as it comes out. 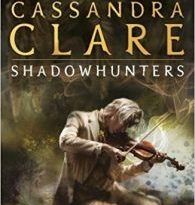