Back when I was really young, one of my career options because I was very good at biology at school was genetics. Reading Dr. Melita Irving’s book, ‘The Human DNA Manual: Understanding Your Genetic Code’ brought back a lot of my old knowledge and updating it to the current science that I already had some background in. 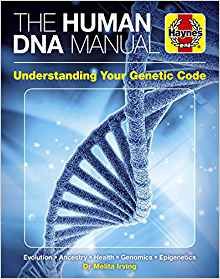 Even so, there are some areas that did make me stop and think. Take Gregor Mendel’s manipulation of green and yellow peas, showing the former was dominate on its first generation. I couldn’t help wondering if he suspected yellow peas would come out in a second generation to keep going. Then again, science is all about curiosity and what happens next.

Something that did surprise me was that the term ‘mutation’ as being out-dated and had a think about that and, of course, Irving’s right. A mutant is only the first of its kind. When there are lots of them with the same attributes, then they are variants from what would be regarded as the norm. As ‘average’ tends to be more hypothetical, then we are all human variants with some more than others differing from the supposed ‘norm’. If anything, it re-enforces our individuality. It does beggar the question as to how would we recognise a true mutation today and what triggers more to be like that.

I did end up having a thought of the existence of genetically passed diseases that are still around. It’s a shame that we can’t compare the numbers now to what they were like centuries ago to gauge how quickly they are dying out or why they are prevailing through more than random chance, although choosing breeding partners with a similar disposition seems to be playing a part here.

No doubt anything particular harsh that shouldn’t go beyond childhood isn’t going to last long but the spread of variants should be monitored in case anything new comes along. Irving points out that people are attracted to people with similar traits suggesting that this strengthens certain predispositions. I’m not sure if that happens all the time, but on a statistical basis probably holds true for certain things like intelligence and smart breeds smart.

A lot of this book is devoted to applied genetics and how many aliments and even some benefits from breeding stock. I did have a sly grin at breeding long-lived people together will get them living longer. Robert Heinlein would have been satisfied with the Howard Families from his Lazarius Long stories. I applied a similar logic with my ‘Psi-Kicks’ stories with the more mixing of the gene pool the more unusual abilities came out.

Irving covers a lot of ground in this from gene manipulation and repair to cloning and the ethics surrounding them. Rather interestingly, this is one area that won’t be static and the laws regarding what can and can’t be used will always be in a state of flux on ethical issues. With the knowledge of the human genome now, it’s getting increasingly likely that some genetic-born illnesses have the potential to be resolved in the womb or even gene splicing and repair later. It’s another instance where reality is finally meeting Science Fiction.

There are plenty of diagrams and photos to illustrate the text so even if some of it goes over your heads then this should balance things out to put things in context. Learning what makes you you will make you appreciate just how unique you are. Understanding ethical concerns should also help you decide if you really want to know about any genetic orientated diseases that run in your family.

As usual, the length of my review determines how much I get out of a book. I’ve only touched the surface above. It’s a great learning curve into an important aspect of modern day science. In terms of Science Fiction, having the correct and up-to-date knowledge in your hands is essential and makes this a must-read book.