‘The House On Durrow Street’ by Galen Beckett is the second novel about the island nation of Altania, which is a recognisable stand-in for England in a fantastic Regency-like fantasy world with magic and Lovecraftian undertones.

All three main protagonists of ‘The Magicians And Mrs. Quent’ are back. The viewpoints change with the chapters this time, which makes for a more varied reading experience.

Ivoleyn Quent becomes Lady Quent when her husband is honoured for his services to the crown. Now that her social standing has been elevated, she splits her time between organising the restoration of her family’s old home in Durrow Street, which is filled with a lot of magick, and taking part in social events. She also finds out more about her abilities as a witch, the history of the wyrdwood and why it is important for Altania to keep the last stands of it alive.

Dashton Rafferdy associates with a group of magicians and learns more about magic being the opening and closing of doors. This becomes important later on in the novel when he teams up with Ivy to save Altania once more from occult dangers. Apart from his magical dabbling, Rafferdy has to attend assembly in place of his ailing father. Upon his father’s death, he takes on the title and seat permanently.

All the while, the Ashen are plotting their invasion and gathering help among the people of Altania. This is shown late in Eldyn Garritt’s plot-thread. Before the Ashen plot is revealed, at least to the reader, Eldyn tries to become a priest to secure his and his sister’s future. But Eldyn has to choose between doing what is right and doing what he desires, being an illusionist and living with Dercy, his illusionist friend and later lover. That the latter is also forbidden by church and shunned by society makes his choice that much more difficult.

‘The House On Durrow Street’ maintains all the excellent qualities which made the first novel so readable. The characters are interesting, the atmosphere is quite dense, the world-building is excellent and the plot moves at a steady pace keeping the reader interested in what happens next. All in all, the novel gives the impression that there is something lurking beneath its tranquil surface, ready to break free at any moment. The end can seem like a bit of a let-down because all the tension which is built up over the last third of the book is resolved in just a few paragraphs. Despite the shortness, I felt the end was satisfying and fitting.

The rebellion steps back a bit this time, having sustained a heavy setback after the quelling of the risings in the first book. The attention is instead directed onto the political manoeuvring in the Hall of Magnates, the activities of the higher levels of society and the actions of the different groups of magicians.

‘The House On Durrow Street’ is a fantasy novel set in a Regency-like era which will definitely delight fans of Susanna Clarke. Older fans of J.K. Rowling should risk an eye, too. I am looking forward to discover if all the Lovecraftian elements will get stronger in the next instalment, ‘The Master Of Heathcrest Hall’, and if the things we only got to glimpse in this novel will get elaborated in the next. There are dark times ahead for Altania and the last book will see a resolution which I am looking forward to. Galen Beckett aka Mark Anthony has a knack for surprising but fitting endings. 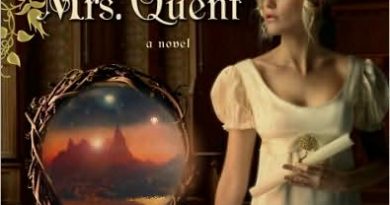