If you thought cults were a new trend, you will be surprised by this book, ‘The History Of Cults: From Satanic Sects To The Manson Family’ by Robert Schroëder. The sub-title is a bit of a misnomer as it extends up to this century. It seems mankind has always been persuaded by things they think are true by those who can manipulate them to do things they wouldn’t do otherwise.

This goes from donating their money so their leaders can live in luxury to murder. With the first of the five sections of the book, people also became willing to kill themselves or others all in the name of such sects. Although I’m going to comment as much as point out details, this is more an indictment that I’m not only paying attention but can make observation from the data presented. 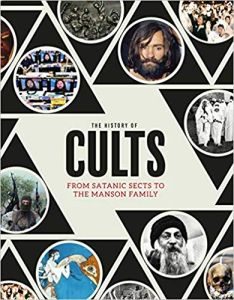 Take, for example, the early religions as these weren’t personality driven but the belief in gods. I’ve commented in the past that it on the strength of these beliefs that their priests got their power of imposing their own ethics and control. The mechanism hasn’t changed over the years other than the number of people controlled that way is slowly dropping off or so I thought until reading this book. It’s when people are caught up into a cult that no one thinks they can’t be caught in one themselves. In some respects I wish Schroëder had examined any common denominators between the cults and the type of people it attracted.

Cult leaders only really came to the fore with the break-up of the likes of Christianity into smaller sects, each with their own interpretation of what to believe. Reading about some of these off-shoots and their activities makes Satanism, which is also explored, look mild in comparison and certainly in a minority. I mean, take the Unification Church or Moonies for instance, supposedly peaceful but making money from manufacturing guns in a subsidiary company. Something I didn’t know was that there are at least 180,000 cults in Japan.

I tried to find out how many there are currently in the world or any country having more cults with little avail. When you consider some of the significant cults employ a measure of brainwashing and excommunication from family members who belong should you leave, you do have to wonder why governments allow this to go on. Democracy seems to be ignored by these cults and vice versa for some reason so it’s no wonder they get away with such things.

By dividing the book into 5 sections, Schroëder also inadvertently addresses the cult separately to the leaders and unnecessarily bulks things up with some repetitions. It would have made more sense to have divided by cult so you aren’t dividing your attention so much and looked at wider issues of comparison.

As someone who believes in free will, this book comes over as more than a little disturbing. We often think that most cults have gone away with the media finding other things to write about. To find out there are still many out there, including those devoted to UFOs and their occupants as saviours, you have to wonder on the people it attracts. The fact that at the top of each there tends to be a very charismatic leader and there is a level of brainwashing and control is worrying.

Equally, although Schroëder focuses on extreme cults, there is also some level of this in general religions as well which really should have been covered. It shows that there is some failing in many humans that they can be controlled unquestionably so easily. Do people just want to be followers? The geek mentality tends to be stubborn but it doesn’t mean we can’t be caught out, even by our own.

Treat this book more as an introduction on the subject but I defy anyone not to be a little worried by how many cults still exist and not to be entrapped by them.