If you’re a fan of science fiction, then you’re likely already well-acquainted with the 1956 film classic Forbidden Planet. But for those who may not have had the pleasure, let us tell you: this is a movie that truly stands the test of time.

Forbidden Planet was a groundbreaking film in many ways. It was the first science fiction film to depict humans traveling in a faster-than-light starship of their own creation, and it was also the first to be set entirely on another planet in interstellar space, far away from Earth.

The film’s iconic robot character, Robby the Robot, was one of the first film robots to have a distinct personality and to be more than just a mechanical “tin can” on legs. In fact, Robby is an integral supporting character in the film.

In addition to its groundbreaking aspects and impressive special effects, Forbidden Planet is also known for its revolutionary electronic musical score. Composed by Bebe and Louis Barron, the score is considered to be one of the first all-electronic film scores in history. The film’s special effects team was even nominated for an Academy Award for Best Visual Effects.

The characters and isolated setting have been compared to those in William Shakespeare’s The Tempest, and the plot contains certain analogues to the play, leading many to consider it a loose adaptation.

The plot of Forbidden Planet follows a United Planets starship that arrives at the distant planet Altair IV to determine the fate of an expedition sent there 20 years prior. The ship’s crew is met by the rather slippery Dr. Edward Morbius, one of the original expedition’s scientists, who warns them not to land for safety reasons.

However, the ship’s commander ignores Morbius’ warning and the crew soon learns that all other members of the expedition were killed by an unseen “planetary force”. Only Morbius, his wife (who later died of natural causes), and their daughter Altaira were immune to this force.

As the film unfolds, the crew learns that Morbius has been studying the artifacts of the Krell, a highly advanced race that mysteriously perished 200,000 years prior. Morbius reveals that he has discovered a vast underground machine powered by 9,200 thermonuclear reactors, and he has also used a device to enhance his own intellect.

As tensions rise between Morbius and the crew, they must confront the dangers of the planet and the mysterious force that threatens them all.

Forbidden Planet may have started as a groundbreaking science fiction film, but it’s also inspired a chain of shops that have become a haven for sci-fi fans. The first Forbidden Planet store opened in 1978 as a small shop in Denmark Street, selling comics and other sci-fi goodies. As the store’s popularity grew, it expanded to a larger location on St Giles High Street and eventually moved to even bigger premises on New Oxford Street.

But the success of the London store didn’t stop there. The original founders, Mike Lake, Nick Landau, and Mike Luckman, paired up with James Hamilton and Kenny Penman, owners of the Science Fiction Bookshop in Edinburgh, to open even more Forbidden Planet locations. Today, there are Forbidden Planet shops all over the UK and Ireland, offering sci-fi fans a grand selection of comics, books, and merchandise.

So if you’re a sci-fi fan looking for your fix of all things out-of-this-world, be sure to check out a Forbidden Planet store near you. You never know what intergalactic treasures you might find!

But, back to the movie, folks. Not only is Forbidden Planet a pioneering, visually stunning, and musically groundbreaking film, it’s also been recognized for its cultural significance. In 2013, the picture was entered into the Library of Congress’ National Film Registry, being deemed “culturally, historically, or aesthetically significant”

While it’s always tempting to revisit beloved classics and explore new stories within their world, a sequel to Forbidden Planet – which has been on the cards, although it is currently stuck in development hell – would be a bad idea for several reasons.

First of all, the original film is a standalone story that perfectly wraps up all of its loose ends. A sequel would either have to retread old ground or introduce new plot points that wouldn’t feel organic to the original story. This would ultimately diminish the impact of the original film and potentially ruin its carefully crafted ending.

Furthermore, the special effects and groundbreaking electronic score that made the original film so impressive would be impossible to replicate with today’s technology. A sequel would likely have to rely on modern special effects and a more traditional musical score, which would not only detract from the original film’s legacy but would also fail to stand up to today’s CGI-heavy blockbusters.

A sequel to Forbidden Planet would not only be unnecessary but would also potentially tarnish the legacy of the original film. It’s best to leave the story as it is and allow it to continue to be appreciated for its timelessness and significance.

In short, Forbidden Planet is a true classic of science fiction cinema. It’s a film that paved the way for many of the science fiction films we know and love today, and it’s a must-see for any fan of the genre. So if you haven’t seen it yet, do yourself a favor and give it a watch. You won’t be disappointed. 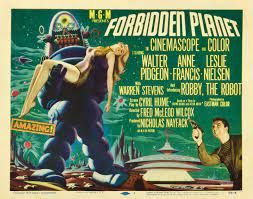