Those of you familiar with the 1960s Legion Of Super-Heroes would have come across the Sun-Eater in Adventures Comic # 352-353, written by a young Jim Shooter with art of Curt Swan, this murky cloud is systematically destroying stars. It took the LSH and them gathering the members of what became the Fatal Five to take it on and failed.

Without the self-sacrifice of Ferro Lad taking the anti-energy bomb into the heart of the sun-eater and destroyed it, the cloud would still have gone on. It was later discovered to be an invention of the alien Controllers in Adventure Comics # 357. If you can pull these three comics, even in reprint, they are worth a look on their influence on the DC Universe from such a teen-age Jim Shooter bringing so much to the LSH at that time. 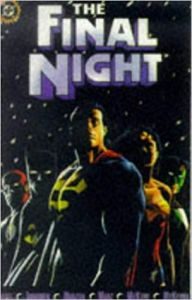 If anything, it was more surprising that we never seen it in the current day until I heard about this graphic novel. Just because the Controllers had one in the future, didn’t mean that there couldn’t have been earlier prototypes or even a natural one. The fact that members of the LSH were in this tale made me decided I ought to look at this volume. After all, ‘The Final Night’ had two elements in Legion lore although with a different sacrifice.

There is a Sun-Eater in the 21st century. Despite an alien called Dusk trying to warn the inhabitants and the newly colonised New Tamaran of the dangers of it and failing, losing her translation device in the process, it is now on the way to feed on a certain yellow sun. Here and with the telepathic translation help of Saturn Girl, Dust is listened to and the super-heroes of Earth plus Lex Luthor spring into action and fail as the sun is encased by the Sun-Eater. The more Earth-bound heroes do various rescues but know they are going to fail. Saying much more that that is going to be spoiler.

There is a clear demonstration that Superman depends on the sun to power his abilities and effectively becomes near normal. This raises an odd question of why this doesn’t happen to him regularly at night? Looking at the age of the original 1996 mini-series, you do have to wonder why the Controllers were never introduced in a sequel, which never happened.

This is one time where the DC Universe could fall apart in a far deeper way than ever the ‘Crisis On Infinite Earths’ never reached, mostly because the deaths of so many characters were cannon-fodder. Here, it’s up and personal.

Just to depress your day, get hold of ‘The Final Night’ graphic novel. It’s very easy to pull the first two parts of the comicbook without realising it. I found it took a while for me to find a copy at a half the current second-hand price but I have a feeling DC Comics will put this volume back in print at some point.