‘The Evil Tree’ is a rather good ghost story that is rather let down by the artistic style used to depict it. With the story taking up 98 pages, there is room for quite a bit of bonus material filling it out to a respectable 110 pages. Erik Hendrix is credited as the writer with Amanda Hendrix as the editor. Daniel Thollin is the artist and Anna Sallstrom the colorist or as we would say in the UK, the colourist. Strangely, there is no mention for the letterer person. Some of the story elements are standard fare for ghost stories. Take one old farmhouse in the middle of nowhere, recently bought by a city couple and arrange for them to bring along five of their city friends for a visit. Throw in a big evil-looking tree and a snowstorm that cuts them off and you have all the ingredients ready to make a good story. This being a ghost story, the beginnings of the action began hundreds of years ago when the head of the Williams family had to make some harsh decisions. The Williams had emigrated from the Ireland to the American colonies, with the husband building a house for his wife and family with his own hands. Luck was not with the Williams side, as one of the harshest winters ever seen brought death to many people. Faced with the dwindling supplies and too many mouths to feed Mr. Williams, made same cruel, heartless decisions that would continue to haunt the area for hundreds of years. As the ghosts make themselves known to the present inhabitants, more carnage ensues with the evil tree always in the background.

I have always thought of a graphic novel as being a marriage between a good story and a gifted artist with the colourist and letterer acting as best man and bridesmaid. The artists is able to save me the effort of having to wade through pages of written text just by depicting in a panel the look, feel, atmosphere and action of what is going on. It’s much easier to look at a drawing than having to mentally construct the scene from written text. With ‘The Evil Tree’, however, I felt the artistic style used did not work. The people are very badly drawn and even worse, so is the evil tree. A lot could have been done to heighten the sense of foreboding with some creative artwork but the opportunity was missed. It is there in the characters dialog but not on the pictorial representation we are presented with.

At the end of the day, I feel disappointed with ‘The Evil Tree’ as it had such potential with a good story. The artwork made it something of a chore to read and I don’t want to pay good money to do chores. 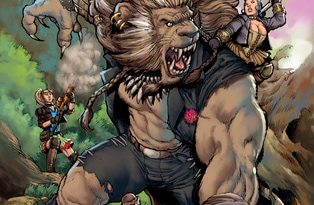