The subtitle of ‘The Door Gunner And Other Perilous Flights of Fancy – A Michael Bishop Retrospective’ – sums up the contents, though it could as easily have been called ‘The Best Of-’. The stories are presented in chronological order and the date of publication is given, presumably so that one can trace the development of his writing. To be fair, he was pretty good at the start. But did he get better? The first story is ‘Piñon Fall’ (1970). Three scrawny brown boys find a strange man in the snow when they are out looking for piñon nuts. Meanwhile, their obnoxious neighbour, a frumpy older woman, finds something odd in her back garden. Bishop creates a haunting atmosphere in the snowfall and nicely contrasts the petty prejudices between humans against bigger events.

The next one, ‘Cathadonian Odyssey’ (1974) is set on a planet that has one ocean. The rest of it is covered in pools of varying sizes each with a tree that dangles its branches into the water. A merchant ship discovered the place almost by accident and three explorers were dropped off later to have a closer look. A strange story of human and alien interaction but very original and with a surprising ending. I’m not sure it was a good ending but it was surprising and an ending is nice.

The next tale was about a strapping black girl and a small, quiet Japanese man who don’t really get on forced to share an apartment in an overcrowded future dome city. I gave up reading ‘The Samurai And The Willows’ after a few pages because it seemed to be just a slice of life tale of misery in an unpleasant urban environment and I almost gave up the book. Even reviewers have their moods. I returned to it a few days later and found it rather good by the end. Bishop writes densely, for want of a better word (he could probably think of one) and is not easy reading. He’s clever at inventing slang which is understandable: stoopsitters, thug boys and concourse trolls. I thought he had made up eurhythmics for a dance craze and wondered if the group got it from this story (published 1976) but further investigation revealed it was a musical education strategy and Annie Lennox did it in her youth.

In the next tale, the husband of a high official is involved in a mining accident and gets his entire body replaced with mechanical parts. He finds trouble adapting to this and wants a job as a machine, not considering himself a human being anymore. He is sent for therapy to ‘The House of Compassionate Sharers’ which is an odd place. I liked this one less. In fact, as I was progressing through the book I liked each story less. Michael Bishop’s development as a writer was going down a familiar path.

Some more examples: ‘The Quickening’ is one of those fantasies where something inexplicable happens and we don’t learn why. In this case, everyone wakes up one morning displaced. Our hero finds himself in Seville with people of all races dumped together and traumatised. The English speakers get together after a while and try to leave. An interesting yarn but inconclusive and they tend to get that way as the book progresses.

‘Taccati’s Tomorrow’ is a slice of life piece about a fan at an SF convention. ‘Alien Graffiti’ has the interesting notion that inscrutable writing appears all over the place but provides no explanation for it. Very modern but I like a Science Fiction idea to have a story attached with a decent ending.

Increasingly disgruntled with the stories in the middle of this vast volume, I flipped to the back and was relieved to discover…comedy! ‘The Angst, I Kid You Not, Of God’ has an alien race taking the nasty, violent people from planets everywhere so that the decent folks can build a better world. It’s told from the point of view of a military Earthman who has been taken and put in group therapy sessions with naughty members of other species. It was very entertaining and imaginative.

Michael Bishop seems to be very much of the Robert Silverberg school of writing. It’s very literary, usually downbeat and with high quality prose. The characters are well-rounded, the backgrounds are skilfully described and the aim is to create an emotional impact. There’s no trace of pulp fiction stylistic quirks, space opera, rip-roaring adventure or any of the more vulgar stuff of Science Fiction. Of course, we are a broad church and there is room for all sorts. If you like easy reading fiction, that’s broadly optimistic with adventurous heroes foiling dastardly villains this won’t be your cup of tea. If you like Robert Silverberg’s short stories from the 1960s on, then this is similar stuff and just as good in that way. Really.

The trouble is I prefer rip-roaring adventure and the more vulgar stuff of Science Fiction. I certainly put plot over fine writing. This is a very good book of its kind but reading it is a slow process, so slow that I haven’t quite finished it yet. Kept interrupting to go and read rip-roaring ‘Star Wars’ adventures for fun. However, I’ve read most of it and can review without guilt. It’s intelligent Science Fiction and fantasy with a rich vocabulary and terrific imagery and prose. It’s not hard Science Fiction of the sort done by Asimov, Clark and Niven. Often there’s a real plot and a conclusion to the stories but some are disappointing in that respect. The funny ones are quite funny and it’s all very clever. Some yarns will disappoint, some will give you real pleasure but isn’t that the case with any big anthology?

Finally, for those who like author’s notes, there are loads at the back explaining the origin of each tale and where it was first published. Stephen King and Isaac Asimov frequently perform this service for the reader. Michael Bishop does it, too, and is just as entertaining as those worthies. Author’s notes add a lot of value to an anthology in my book and in his, too. 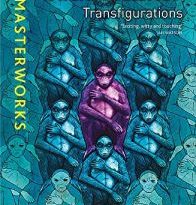