Trivia question: what day of the week is “The Day the Earth Stood Still”? Answer later in the article.

The Day The Earth Stood Still is a sentimental favorite among Fifties science fiction films. It is certainly good but not nearly as good as its reputation would make it. What you have is a story
of militant pacifists from outer space who come to Earth to say “be nice and don’t fight or our robots are going to kick some ass.”

This has never been my idea of an inspiring message. And the mere fact that it isn’t the aliens themselves but their robotic police does not make the message one iota more palatable, at least not for me. I think that the concept that aliens were going to come down and keep peace-or at least limit warfare-like some sort of super-parents is less than appealing.

The film begins with a subjective sequence showing an approach to Earth from space. Once again we see that the 1950s’ fascination with flying saucers is used in a film, in fact more than some of
the films that just had references. Here the flying saucer which we saw the first sequence actually lands in a park in Washington D.C. The military immediately surrounds the craft. From the saucer comes a mysterious alien, Klaatu, who is almost immediately shot due to paranoia on the part of the military guards sent to meet him. The saucer again opens and out comes a nine-foot-tall robot who destroys all the weapons aimed at the saucer, then turns himself into a statue. Klaatu is taken to a hospital but heals himself faster than Earth medicine could. He requests an audience with all world leaders and is refused. He escapes from his hospital to find out for himself what humans who are not politicians are all about.

At a science fiction convention I attended, The Day The Earth Stood Still was used as an example of a science fiction film that is not also a horror film. That seems to be the general perception by most fans, yet I think looking at the film there definitely is an element of horror in the film. I see this in two aspects. First is the way Klaatu is handled in the early parts of the film. Often his face is hidden or we see him from behind or in shadow. This combined with Bernard Herrmann’s menacing music is clearly intended to make Klaatu seem threatening. And certainly the robot Gort is intended to be frightening. He kills when he has to and stands implacably the rest of the time. On subsequent viewings one realizes that Gort kills only two soldiers in the course of the film and then only because they are threatening him with rifles. 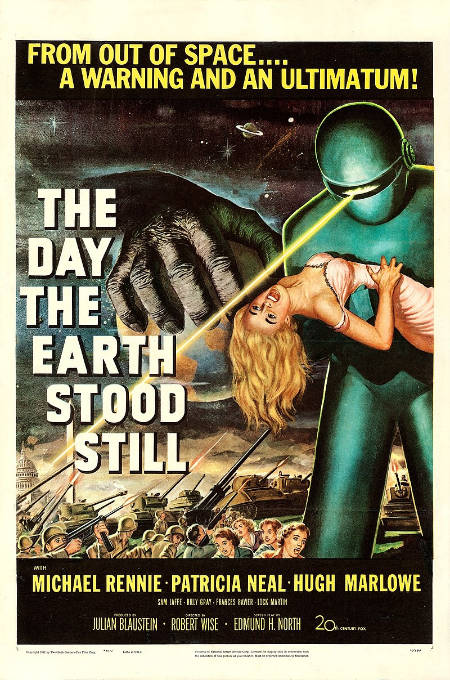 Patricia Neal is in love at the beginning of the film and discovers she doesn’t really like her intended during the course of the film. One of the things she does not like is his assumption that he should be a dominating male. In some ways, this film is years ahead of its time. The other major lead and certainly the only Earth-person of much real interest value in the film is Sam Jaffe as Prof. Barnhardt, a thinly disguised imitation of Albert Einstein. Jaffe was a great character actor who seemed equally at home playing German scientists or Gunga Din. The generation who was growing up seeing ‘The Day The Earth Stood Still’ may who have come to think of him as Dr. Zorba on the TV show ‘Ben Casey’.

There are a number of nice touches in the film. Several well-known news commentators of the period agreed to appear as themselves adding an air of authenticity. Names like Elmer Davis are not familiar now, but were certainly so at the time of the release of the film. We also get a feel for the contemporary Cold War paranoia. Helen Benson jumps to the conclusion that Carpenter is a spy. Also the Christ symbolism is a bit blatant. Klaatu, who takes on the name Carpenter (initials J.C.), is hated in spite of his message of peace. He is killed but returns from the dead to meet with people and then to ascend into the heavens. Imaginative visual touches include Gort’s strange death-ray lens and a rather interesting set for the internals of the saucer. It has been suggested that, as in the short story ‘Farewell To The Master’ by Harry Bates on which the story is based, the robot is really the boss and not the human. I see no internal information that is conclusive either way, but the film is marginally more interesting if Klaatu is actually running interference for the true master Gort.

Some impressive scenes with Gort and the score by Herrmann give this film most of what is good about it.

Trivia answer: And what day of the week was ‘The Day The Earth Stood Still’? It was a Tuesday. Bobby did not have school the day he went to Prof. Barnhardt’s house but did have school the next day so presumably that was a Sunday. That night Klaatu returns to the house and tells the professor that the demonstration will be two days hence.