From the runs of various British comics prior to ‘2000AD’, there are several long running stories I would love to see reprinted in volumes: ‘Agent 21’ from ‘TV21’, the ‘Countdown’ strip from the same named ‘Countdown/TV Action’ comic, some of the nearly forgotten SF stories from ‘Lion’ and ‘Smash’ comics. Hell, I’d love to see ‘The Iron Man’ robot stories from ‘Boy’sWorld’/’Eagle’ and even ‘The Stinging Swarm’ from ‘The Dandy’.

The biggest surprise, however, was seeing from ‘Fantastic’ comic, the run of ‘The Missing Link’ and ‘Johnny Future’ getting a release as complete volume. It was the main reason why I kept going with ‘Fantastic’ from 1967 after I started buying the full colour Marvel Comics. Through ‘Johnny Future’ we had our first bona fida British adult super-hero, who was both smart and super-human and nearly forgotten over the years. 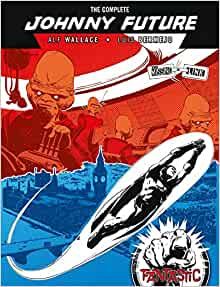 Steve Holland, in his introduction, points out that Spanish artist Luis Bermejo didn’t rely on any secondary shading like thatching. Looking at the art again after so many years, I couldn’t help thinking that his photo references of London, along with the number of weekly pages needed, probably determined that he limited his style or he thought it might be in colour. All the strips were in black and white except the one from the ‘Fantastic Annual’, also shown here which was in full colour.

The comicstrip started off with ‘The Missing Link’, a super-strong primitive discovered in Africa who somehow acquired a belted pair of shorts, in parallels to a certain giant gorilla with love interest, is captured and taken to London where he escapes. He finds refuge in an experimental research laboratory where radiation exposure transforms him into an advanced but uneducated man who can’t even speak.

The device that transformed him is unstable and despite his attempt to stop it, explodes. Doctor Viktor Kelso, the scientist who created it, manages to get the now human Link imprisoned, where he is given books and rapidly learns. He is also aware of just how strong he is. Learning that Kelso has remade the machine and, determined to clear his name, he escapes but Kelso’s device paralyses everyone and a bit slower for him. Although he beats Kelso, his confession is lost and he is left on the run. He adopts the identity of Johnny Future and his first menace of the Animal Man who can take control of any animal menacing London.

Adopting the name of John Foster, he succeeds in getting a caretaker job at an electronics firm and from there on, we follow his adventures. Editor/writer Alf Wallace wrote to Luis Bermejo’s strengths, often showing a lot of animals and action scenes. His opponents varied from smart to strong and equally how he beats them, often by outsmarting them as with Mr. Opposite. Pure nostalgia and still works today and a reminder that we did have some powerful comicstrips in our UK comicbooks.

Back in the day, we readers knew the head honchos at Oldhams’ Power Comics as Alf, Bart and Cos and from the biography at the back of the book, I now have their names, obviously Alfred Wallace, Bob Bartholomew and Albert Cosser. Couldn’t have made my day any better after all these years.