There is an old saying that you should never judge a book by its cover. This should also extend to cover the size of a book. Publisher Andre Deutsch is doing a series of small ‘Compact Guides’ and ‘DNA’ by Kat Arney was the closest to our remit. What I didn’t expect was a dense but very readable text giving all the details about deoxyribonucleic acid (DNA) from its discovery to how it is used to how it is the building blocks of all life.

Of course, I know a lot of this material already but if you’re after a detailed primer that you can slip into your pocket to read on trips then this book is ideal. The only thing really missing are some diagrams. I can understand a lack of photos to keep the price down but some aspects, like showing DNA creating RNA protein diagram would have been useful. 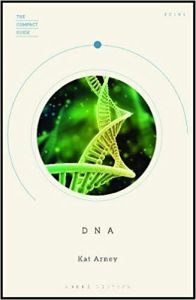 When it comes to the 24,847 genes we have, only 2% of which makes us, the rest regarded as junk DNA. I tend to see this as more like the gene history of life on Earth that we all carry. As Arney points out later in the book, it’s less about the DNA and the switches that are turned on when DNA makes ribonucleic acid (RNA) that creates life. It is the understanding of this that has led to paying more attention to these and looking at the DNA of people to study these switches so where there are some serious genetic illnesses that a splice can act as a remedy.

A lot of areas of these are still nascent research but already being used and even stopped AIDS in its tracks with the discovery of Stephen Croyn who hadn’t fallen ill. My own observation of this is applying Darwin’s survival of the fittest depends on the spread of favoured successful genes. Unfortunately, most homosexuals don’t breed so there was no natural genetic counter-measure spreading across the population. A useful argument to people who scaremonger about genetic splicing as it’s actually needed. Sickle-cell anaemia, amongst others, is also facing a cure in the near future.

I hadn’t realised that there had been some re-examination of Gregor Mendel’s of green and yellow peas although there is no mention of the giant and dwarf pea plants he cross-pollinated.

Another myth blown away in this book is the different hemispheres of the brain being totally responsible for maths and arts. Something that remind me a lot of how school textbooks described different parts of the tongue tasting different things. It might simplify things but doesn’t represent what really happens.

The one advantage of reading up-to-date science books is get state-of-the-art as to what is going on at the moment and genetic research has taken great strides since the human genome project and is a cutting edge science now.

For such a small book, you are going to come away being very well-informed and, even more unusual, this is a real page-turner. If you want a grounding in genetics this is a good book to read.