I should point out that you can get both of these films separately or even as part of other collections, so you aren’t limited to choice on how you get them or which region issue. 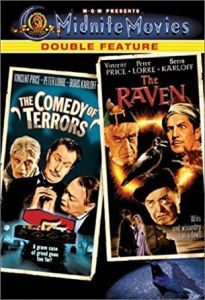 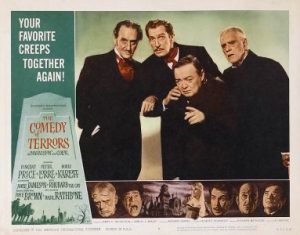 Although first on this twin film DVD, ‘The Comedy Of Terrors’ was recorded after ‘The Raven’, it is on Side A. Economically, Roger Corman had two days spare on Boris Karloff’s contract and quickly put film together from a Richard Matheson script.

Waldo Trumbull (actor Vincent Price) is literally running his father-in-law, Amos Hinchley (actor Boris Karloff), undertaker business into the ground (sic). The opening scene shows Trumbull and his employee, Felix Gillie (actor Peter Lorre) waiting for the funeral party to leave the cemetery and then dump the body into the grave and taking the coffin back with them. Did I mention this was a black comedy?

Back at the funeral parlour, the alcoholic Trumball wants to poison his father-in-law but has his over-bearing wife, Amaryllis (actress Joyce Jameson) nearby so only can threaten with the bottle. Gillie is also smitten with the opera-prone and glass-shattering Amaryllis. Over the story, so is she. Who wouldn’t be with such a husband as Trimbull.

John F Black (actor Basil Rathbone) visits, reminding Trumbull he has a year’s back rent to pay or they’ll be evicted. So that night, Trimball takes Gillie as the housebreaker as he’s a bank-robber and escaped convict on the run with him to drum up some trade by murdering some of the local gentry. Things don’t go quite to plan. Oh the murder is fine. Amazing what you can do with a pillow. However, to call them inept is putting it mildly.

They wait nearby for the body to be discovered and move in to ‘help’. The only problem is that they are left waiting at the funeral as the widow, Mrs. Phipps (actress Beverly Hills/Powers) failed to arrive. Trimnbile goes to investigate and finds she’s gone with all the furniture and his fee. As Trumbull cries out, ‘Is there no morality in this world?’

Tumball decides his next victim needs to be someone who is unmarried and their landlord, Black, is the obvious choice and clear the back rent with one pillow. The only problem is Black has bolted all the doors and windows downstairs and Turnbull has to boost Gillie up to the first floor. Unfortunately, Black suffers from catalepsy and refuses to die, even back at the funeral parlour. When Amaryllis can’t persuade Trumbull to bed over money, she finally agrees to run off with Gillie.

Anymore is definitely spoiler and what a spoiler. You’ll wonder who was actually dead at the end. 55 years later and it is still funny.

Considering this has the same key cast as ‘The Raven’, it is a demonstration of how good these actors were to totally turn against type. All of them are marvellous at comedy. Vincent Price especially shows his flair. Incidentally, Gillie never gets Trumbull’s name right and I thought I’d keep that tradition in this review.

By the way, Orangey the cat as Cleopatra here had a marvellous career, appearing in the 1960s ‘Batman’ and ‘Mission: Impossible’ series amongst other shows.

The main extra is Richard Matheson over 9.5 minutes tells about the film. Even Basil Rathbone needed no persuasion to be in it. Matheson points out that the film title was thought to be too horrific than comedic but was accepted. 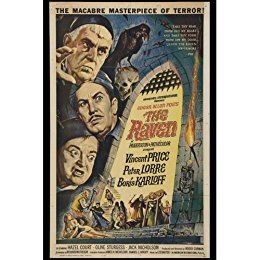 The plot in brief but this time with this time with the roles. Dr. Erasmus Craven (actor Vincent Price) is contemplating his magic at home when a raven taps on his window. Let in, the raven explains that he was transformed into this state in a magical duel with Dr. Scarabus (actor Boris Karloff), head of the United Brotherhood of Sorcerers. Only to be able to rely on concoctions, he was no match for Scarabus’ hand gestures, something that Craven himself can do. However, to undo the spell, the raven needs Craven to brew the counter-spell. So, for the first time since his father died, Craven has to visit his late father’s laboratory. Unfortunately, he doesn’t restore the raven totally to human form and the annoyed Dr. Adolphus Bedlo (actor Peter Lorre) insists Craven makes more of the formula. He also explains that he saw Craven’s deceased wife, Lenore (actress Hazel Court), in Scarabus’ castle, which is enough to convince Craven they must go when he restores Bedlo to normal. They are accompanied by Craven’s daughter, Estelle (actress Olive Sturges), and Bedlo’s son, Rexford (actor Jack Nicholson). Everything else is a delightful spoiler.

The extras are important. A 6 minute interview with Richard Matheson analysing his film and that there was no hint of the comedy in its advertising promotion. 8 minutes with Roger Corman about why ‘The Raven’ is one of his favourite films. 5 and a half minute promotion record by Boris Karloff and Peter Lorre with photos from behind and in front of the camera. The promotional trailer is also 2 and a half minutes long

Considering director/producer Roger Corman’s preference for few takes and low budget, ‘The Raven’ works on all levels. In the extras, he explains for a comedy to work, it needs a happy set and the cast all had a good time on and off the camera. When you consider that Peter Lorre liked to improvise which threw Boris Karloff and Vincent Price somewhere between them both even more remarkable. It’s often a testament to good films is how they have such a long shelf-life compared to others and ‘The Raven’ certainly qualifies for that. If you’ve never seen the film, then you’re in for a treat and there’s still some bird tapping on my window.