‘The Children Of Gods And Fighting Men’ is a historical fantasy novel. Both the history and mythology are drawn from ancient Irish sources so they are ‘true’ up to a point. The author Shauna Lawless didn’t just put some vampires in the past. The story begins in 981AD when the Viking King of Dublin has died and his young widow, Gormflaith, has taken him to Iona monastery for a Christian burial, as per his wishes. Gormflaith is secretly a Formorian, one of only two survivors of an immortal race with the power of fire magic.

The other one is her brother, Máelmórda, who is King of the Uí Fáeláin and serves the King of Leinster, for now. Irish politics was complicated even back then. The Formorians have bred with mortals before but few of the offspring inherit their long lives or magic. Gormflaith has a mortal son, Sitric Silkbeard and her burning ambition is for him to become King of Dublin and eventually High King of Ireland, a post for which there are many competitors. 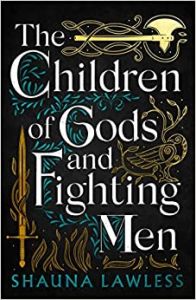 Chief among these is Brian Boru, King of Munster, when the adventure begins. We get to see him, eventually, through the eyes of Fódla, one of the Tuatha Dé Danann, a race of warriors sworn to kill Formorians who believe they have succeeded and are unaware of the existence of Gormflaith and her brother. The Tuatha Dé Danann have withdrawn to an isolated fortress and are now forbidden to breed with mortals as they ended up fighting each other in the past when supporting the ambitions of their offspring.

However, they keep watch over human affairs by planting spies among monks and nuns, for the Christian religion is taking over the old one and the clergy have access to kings. Tomas, leader of the Tuatha Dé Danann, sends Fódla, a skilled healer, to ingratiate herself at the court of Brian Boru and spy on him.

The first person narration alternates every chapter between Gormflaith and Fódla, revealing their very different characters. Gormflaith is a beautiful queen who speaks almost as an equal to kings and princes. Fódla appears scarred and ugly under a spell of disguise and treats the poor folks. Gormflaith thinks the goal of making her son High King justifies any means and is completely ruthless. Fódla wishes the endless wars would cease and is generally nice, but not silly or unrealistic. She’s much too old for that.

The story opens in 981 and ends in 999, covering twenty years of history. It was a different age with enough scheming and treachery to satisfy any fan of a very successful sword and sorcery television show whose name escapes me. There are a couple of gory episodes but not much violence on stage here, at least not yet. The conclusion sees both lead characters having to make hard choices.

Historical fantasies lure me into looking up the real history which inevitably leads to spoilers. Many of the characters in ‘The Children Of Gods And Fighting Men’ existed and their principle deeds are accurately told but not all. Not yet. This is a series and there’s more to come. If you look up the real history, you will know what happens next. Don’t do it!

I took the book for review because years ago I enjoyed the dark age fantasies of Juliet Marillier though her ‘Bridei Chronicles’ were set in Scotland five centuries earlier. Shauna Lawless is a different sort of writer, not as wildly romantic but in her own way does the job just as well. Her love of the source material shines through and she has clearly done her research. ‘The Children Of Gods And Fighting Men’ is a great debut novel and an enjoyable read for any fantasy fan but especially for anyone of Irish descent interested in the history of the old country – millions of potential readers there. I look forward to the rest of the series.