The publisher Charlton has different memories for people depending how old you are. In their time, they were the third major publisher next to DC and Marvel Comics, although they weren’t restricted to comicbooks. Despite having the lowest pay rates for creators, they compensated for this with creative freedom which attracted the likes of Steve Ditko to work for them and upcomers like Dick Giordano, Joe Staton, John Byrne and many others to get their careers kick-started before moving on. 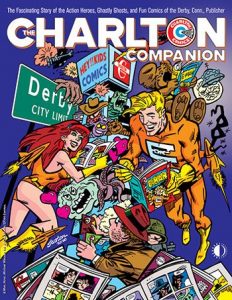 Jon B. Cooke’s book, ‘The Charlton Companion’, goes back to their roots and Italian immigrant Giovanni Santangelo angelized into John Santangelo who became a racketeer selling sheetmusic without copyright permission and spent a year in jail where he met accountant Edward Levy, also serving time. They joined together and went back into sheet music, but this time getting the copyright permissions and built the Charlton company, named after their two daughters.

Don’t think this book to be a light read for a third-rate company as they were really a busy in all manner in the printing business and comics were only part of their interest. Having their own printing press, even surviving a flood after the dam burst at Derby, Connecticut, gave them an edge over DC and Marvel Comics who got other companies to print their output and you do have to wonder, even today, why they never thought to do this themselves. Then again, printing companies make their money by keeping their presses going constantly and perhaps they thought they could never do it. Later in the book, the flaw of having your own printing presses is not keeping up with the times which contributed to their downfall.

In many respects, Santangelo and Levy’s racketeer background combined with better business acumen from learning from their mistakes seemed to serve them well. When they wanted to do a Tarzan comic they bothered to have his copyright status checked and found it has lapsed to do so. Occasionally, reading behind the lines, I did wonder how far their sharp practices went but Santangelo really ran a fiefdom.

Don’t forget, this is a look at the history of the Charlton company and there is a lot of history. It’s only mid-way through the book that we get to their ‘action heroes’. As editor Dick Giordano points out there was a need for a name that couldn’t be called ‘super-heroes’ and only Captain Atom had super-powers. Peacemaker of the recent 2021 ‘Suicide Squad’ film and his own TV series started off at Charlton comics and had the same silly helmet back 50 years. When the company was closing, DC Comics bought their action heroes and ultimately became the basis for a certain Alan Moore/Dave Gibbons series.

Looking at how Charlton comics were distributed, I think I would be hard pushed to remember seeing them in UK newsagents, even coming over as distribution freight. In fact, the only way I could get hold of ‘E-Man/ROG-2000’ comicbooks was in the comicshops.

It’s very weird reading this book where you are constantly being reminded what a cheapskate publisher Charlton was but also giving creative freedom, more from not caring from the top then any other reason, and the number of pros that did work for them over the decades. If you favour particular artists, then it might be worth getting this book to see if there’s any material you’re missing for your collection.

With the dominance of the Big Two, there hasn’t really been this kind of in-depth look at Charlton and only two issues of TwoMorrows magazine ‘Comic Book Artist’ devoted to them. Expand your knowledge and get this book.

2 thoughts on “The Charlton Companion by Jon B. Cooke (book review).”