Getting back into the swing from Mike Carey’s first novel, ‘The Girl With All The Gifts’, becomes a lot harder with no précis of what happened there. Checking my original notes, there is little to connect to the two stories other than the post-apocalypse reality anyway. However, I really do wish editors and authors paid more attention to the recap and not presume that having read it will have instant recall of events from a year back. Things aren’t helped by Carey’s writing in near past tense descriptive that lacks emotional content. You’re told what is happening but at a clinical level. None of which is helped by not seeing what the threat is from the beginning, just in case new readers start here. These are the hungries by the way and are essentially zombie-like children who can infect with a bite. Instead, we spend most of the time with a military run scientific driven team who are moving down from Scotland collecting samples from dead children and getting in trouble. That’s it really until the end of the book which is spoiler. Even this is spoilt when any potential tension is suddenly broken and you’re left wondering how did that happen?

Oh, there is a scene at the beginning of the book where Samrina Khan is picking up supplies from a chemists and a less obvious error. Insulin is actually stored in a fringe and even if the power has gone off, it would still be found there than in the open.

What is irritating is the style of writing and I do have to wonder if the praise given on the book cover is addressing the first book when I had similar criticism. It does little to instil interest in any of the characters’ survival because it’s so clinical. You’re told what is happening and then you wonder why you should care. Remembering Carey’s background, I can’t help but wonder if he’s relying more on how he sets up a plot for a comicbook artist than for a novel. Maybe it would have worked better that way. 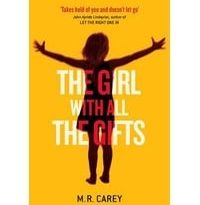 The Girl With All The Gifts by M.R. Carey (book review).

The Girl With All The Gifts by M.R. Carey (book review).