If you’ve ever read one of those books about some exotic country filled with photos and essays about the lives of the people living there, you’ll have some idea of what ‘The Ankh-Morpork Archives’ is all about. The central conceit, if you will, is that the inhabitants of the city of Ankh-Morpork are worth reading about, whether you’re student of anthropology or merely a curious tourist. 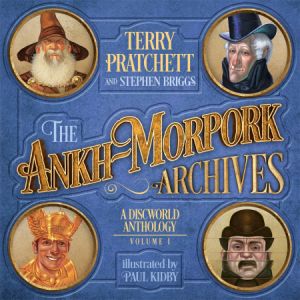 At 240 pages and 24 by 24cm in size, this is a big, heavy book that’ll rest on any coffee-table with a certain solidity. In fact, the whole thing oozes quality, with colourful hardback covers, beautifully marbled endpapers and heavy, glossy pages. Of course, for £25 you’d expect a decent return for your money but, if you’re a Pratchett fan, this book promises a great deal. Fortunately, once you open up the book, it pretty much delivers on that.

There are four sections to the book, reflecting the source material, four volumes of the old ‘Discworld Diaries’, specifically the ‘Discworld’s Ankh-Morpork City Watch Diary 1999’, the ‘Discworld Fools’ Guild Yearbook And ‘Diary 2001’, the ‘Discworld (Reformed) Vampyre’s Diary 2003’ and ‘Lu Tze’s Yearbook Of Enlightenment 2008’. Needless to say, these have been out of print for many, many years now and what ‘The Ankh-Morpork Archives’ sets out to do is remaster the illustrations alongside the words of Terry Pratchett and Stephen Briggs, bringing them to a whole new audience.

Each section is introduced with a couple paragraphs from Briggs and Kidby, essentially reminiscing on the process behind their contributions to the original diary and these throw up some nice insights into Pratchett’s character, as well as Pratchett’s belief that Kidby rather resembled Nobby. While it’s hard to say where the balance between Pratchett and Briggs lies so far as the text goes, it all reads very much as true Discworld material, with all the wordplay and genre jokes we’ve come to expect. But there’s also that edge of righteous anger that gives the Discworld its bite.

After the section on the much-loved Watch come the Fools’ Guild. Here, again, Pratchett and presumably Briggs are being both silly and serious in how they pick apart the seemingly cheerful exterior of the clown. It’s often said in our world that comedians are sad on the inside but, on the Discworld, that’s an understood part of the trade. It’s those without hope who become fools and while the Guild cannot promise happiness to themselves, each fool knows that he brings happiness or at least laughter to those he entertains. Of course, this being a Guild, the fools are not only entertainers but spies and soldiers as well, hence such sections as a description of the clown’s martial arts.

Next come the reformed vampires and here Briggs points out the hidden ‘Easter eggs’ to be found in the vampire names, something I won’t spoil here. Here, the idea is that these reformed vampires are rather like recovering alcoholics, doing their best to support one another. It’s all rather touching with its pledges, tips on alternative food and drink and even the difficulty in avoiding being ‘cool’, something vampires have to deal with, through the use of boring clothes and fluffy slippers.

Finally, there’s the section on Lu Tze and his path to enlightenment. Despite the earnest gallery of monks, abbots and novices, the joke here is that the religion described here is based on the commonplace sayings of Lu Tze’s landlady. It’s all rather daft but, of course, that’s the point. If we’re shown how a religion is invented, it’s absurdities become much less easy to ignore.

There’s a lot here to like and the presentation is top-notch. While the relative lack of colour illustrations is a shame, almost all the drawings are in sepia tones, the balance between the artwork and text is good. It’s a coffee-table book for sure and one to dip into rather than read front to back, but there’s just so much richness here it’s hard to come away feeling short-changed. Given the content, it’s a book for ‘Discworld’ fans who already know the stories and just want to enjoy some of their favourite characters and gags. For such a fan, ‘The Ankh-Morpork Archives’ would surely make a lovely Hogswatch present!