Sony captured Spider-Man a couple of years ago and this is their second rendition of the Marvel comicbook hero. Every year there are blockbusters portraying old Marvel guys, subjects of our fantasies for half a century and, every year, in order not to be outdone, they try to make the best movie ever by surpassing everything that has gone before. However, they have learnt that new is not always best, so they have shot the movie on film rather than electronic format and have added the stunning CGI on top of this to make what can only be described as an extravaganza. Where will it end? Will the search to create reality culminate in beating reality itself? Can we see everything from every possible angle and definition that exceeds the perception of the human eye? The answer is, probably yes! ‘The Amazing Spider-Man 2’ is as good as you can get without being there yourself. It’s over two hours long but it couldn’t really be much shorter otherwise you would feel cheated. Why then did they delete so many scenes? What was wrong with leaving them in the actual movie? The Blu-ray edition includes a lot of extra material, some being the deleted scenes. There are nine extra deleted scenes which can only be found on the Blu-ray so, in showing them, you are left wondering why they were cut out? There are also another four deleted scenes which are included with the DVD version. Maybe this is to fit into cinema schedules which do not really run to the extremes as we had in the past with the likes of ‘Cleopatra’. Maybe they just can’t keep bums on seats for much more than a couple of hours which is a pity because it detracts from a movie somewhat but at least with the Blu-ray, we are able to perceive what it could have been. We haven’t really been cheated.

The movie itself? Spider-Man needs no introduction and the web-slinging hero has been with us so long that everyone from the smallest child upwards knows who the blue-and-red guy is. With the evolution of the movies, the last one in particular, we see a more human Peter Parker with a dark side to his character. Dare we call this the dark web? Certainly, for people with a fear of heights, lots of the scenes are a bit unnerving. Palms end up sweating even though we know it’s only CGI and not the real thing. Unfortunately, the aerial acrobatics around skyscrapers only make things worse. It’s not real, you say to yourself, but for a while you actually believe it is.

Spider-Man has evolved. Remember the earlier versions and also movies like Batman where a lot of time was spent introducing us to the characters and all their gadgets. This was the process of familiarisation with super-heroes and what they were all about. Well, we have gone past this with ‘Amazing Spider-Man 2’ because everyone knows who he is and what he does, so allowing for more time to develop the story and plot. In organising this plot, they have taken a bunch of characters, namely Peter Parker, Gwen Stacy his girlfriend, Aunt May, Harry Osborn and Max Dillon and connected them all together in a web with lines going from one to the other making them all interdependent. It’s a biomass and the actions of one have an effect on all the others. Things seem to be going okay and Max, a bit of a nutter, after being saved by Spider-Man ends up in the laboratory being bitten by an electric eel. Let the battle begin! Max becomes anti-hero Electro and, behind the scenes like a puppet master, is the evil organisation Oscorp.

With relationships difficult at the best of times, it’s not easy being a super-hero. This is something we have seen with all of them from Batman to Superman, the X-Men and all the rest. With a new villain to beat, make way to fantastic battle scenes in glorious colour and sound. Maybe half the movie is taken up with action scenes, maybe more to be correct, and at times they become self-defeating. Like a wrestling match which has been fixed from the start, you know that all the decisive action will take place at the very end and the highs and lows leading up to this have all been engineered for your entertainment. Then the result lets you down because ‘The Amazing Spider-Man 2’ doesn’t really end decisively in any way. Why not? It’s because ‘The Amazing Spider-Man 3’ will be coming your way in the future and after that maybe ‘The Amazing Spider-Man 4’. So, don’t expect the end to be the end!

The Blu-ray version costs a little more so you would expect to get more for your money. First of all, it’s available with sub-titles in English and many other languages but this will be common to the DVD. The sound and picture quality come through as completely stunning. Surround Sound could not be any better. Apart from this, the extras include a commentary, an interesting one at that, with producers Arad and Tomach along with the writers Pinker and Kurtzman. There were a couple of bits about music but the main difference from the DVD is the exclusive addition to the Blu-ray of a 100 minute feature called ‘The Wages Of Heroism’ which was basically about the making of ‘The Amazing Spider-Man 2’. Split up into half a dozen parts, it’s interesting and absorbing and, by the time you finished watching it, you feel you know everything about the production.

In ancient Rome, they put on circuses to amuse the population and keep them from causing trouble but that sort of thing is frowned upon today. Instead, we do it all by make-believe and put on shows visible in our living rooms which are more glorious and more spectacular than anything seen before. Beware, however, because in ancient Rome they got to the point where trying to outdo the last performance became either too expensive or too improbable and if it becomes ludicrous the whole thing collapses like a pack of cards. We haven’t got to that stage with Spider-Man yet and, judging by what is available, it should stand the test of time for at least two more showings. The Blu-ray is close to perfection as far as technical specifications come and as long as the storyline is maintained, Spider-Man will continue to enthral. Yes, it’s one to recommend! 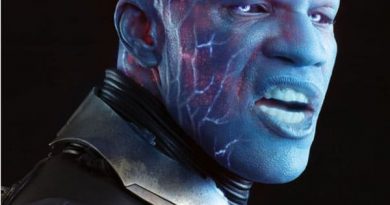 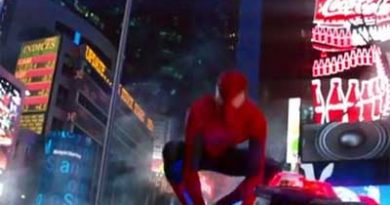