Even just doing a page flick of this book, ‘The 2001 File: Harry Lange And The Design Of The Landmark Science Film’ by Christopher Frayling is impressive. Harry Lange was the key designer on ‘2001: A Space Odyssey’, and from his pencil came the designs for all the technology from spacecraft, exterior and interior, to spacesuits. With this book, you get to see it all and at a large scale. You might have seen some of these illustrations before but not at this size and certain not all of them together. The first 80 text pages of this book focuses on how Harry Lange became involved on the film. During the opening months, Kubrick was looking at people like Ken Adam, who designed for him in the past and then elsewhere. Ultimately, it was Arthur Clarke himself who suggested Kubrick look at Lange’s work for Werner Von Braun and there are some samples showing a circular space station, although this version wasn’t on end. Much of Kubrick’s insistence was to look as realistic and functional as possible. The decision as to what the aliens should be went through many ideas before making them not there at all.

There are extracts from the first screenplay and so much of it was accompanied by a narrator explaining things. As we all know, that got chucked out the window and Kubrick went along with less is more. There were 40 companies that supplied information and even allowed their logos to be used was extensive, more so in a day when companies didn’t pay for product placement. The only thing they had to ensure was that IBM was not associated with any computer malfunction although even they thought Artificial Intellience would be possible by 2001. In some respects and my eye looking at NASA’s output today, there are a lot of companies involved in every aspect of design so ‘2001’ wasn’t that far off how things were really done.

As to HAL being letters up from IBM, this was no different than ‘Daisy’ although being Lange’s wife was just a song Arthur Clarke had heard being used after he heard it being used for a computer song demonstration and it running down. The newspad device, although attributed to Kubrick was in fact designed by Eliot Noyes and Harry Lange, based off an idea by Arthur C. Clarke. I wonder if it ever caught on?

What finally got Kubrick moving on filming was because his time allocation for sets in the studio was running out and if he didn’t get things done, they would be stripped (read that as taken down). Reference is made to Brian Johncock (soon to be Johnson) and a couple other people poached from ‘Thunderbirds’ although modelmaker David Watkins doesn’t know why they never got a credit especially as how much work they did on the models and ran the model shop. For scratch-model-builders, they favoured Polaris submarines for the most detail parts.

There’s some unusual info regarding the space station as even back then NASA said they would never leave some of incomplete because in space it would be seen as making things difficult for themselves. These days, we’d probably attribute this to budget cuts.

It’s interesting seeing the list of known models that weren’t trashed although absent from this list is the Discovery and Monolith. As you can tell from my comments so far, there is a lot of background information in his book. Some you might be familiar with but a lot of it is first hand making this book singularly unique even before getting to the gold which is the designs.

With all the designs are photographs from the film so you can see how they evolved. Even though the designs were made in 1966, your jaw will still drop from seeing them and their functionality. Back when I watched the film in 1971 in three sittings on the same day, I never dreamt I would one day own my own computer let alone have programmed them.

If you were ever confused as to which of the satellites orbiting the Earth were nuclear armed, then this book will put your mind to rest, even if they are rather close together. The Orion-III space shuttle also had a back-thruster in its original design to get into orbit but loses it once in space.

The evolution of the space station is a lot more convoluted and from the diagrams only really settled down when thought was given to how spaceships docked with it. In case you haven’t figured out from watching ‘2001’, the centre hub is also the most stationary part of the station. Once that was established, the twin-wheels was worked out from that.

The same could also be said of the Aries-1B used to go to the Moon. One rather interesting illustration showing it on landing bay with an airline tunnel structure into Clavius Base reminded me of something from the British puppet show, ‘Space Patrol’ and I suspect that might have might Kubrick select what we have in the film.

The Moon Bus actually started off with wheels before jetting across the surface. I do have to wonder if that choice was primarily to reduce complications of a shaky ride and to get a move on to the excavation site.

What was really fascinating was seeing the different shapes for the Monolith. Some of the shapes were quite convoluted. Considering how difficult it was to keep the final block dust-free, some of these would have been impossible to keep that way.

We’ve all heard of how the Discovery had dragonfly wings to dissipate heat but to see all the variants here is even more amazing. The only thing that stayed the same throughout was the inhabitant sphere although for a while it only has one pod door. It does raise an odd point as to why have three doors rather than rotate the pods inside the hanger but I suppose if the door ever jammed they’d have immense complications. Eventually, we have the version we all recognise. The strongest lesson from all of this is that the final versions of anything used in genre films are not a fluke of getting it right the first time but a long of sketches finding what the director wants to see on screen even before the model is made.

What was more interesting was how Lange played around with various aspects of the interior. Right from the start, the centrifuge was included and you get the detail of this. There were times I wish there was notes on some decisions, especially as at one stage the sleeping quarters was separate and actually behind the centrifuge before using the vacant hibernation capsules which actually makes a lot more sense because they would be under Moon gravity rotation and more economic. Seeing the entire final layout is fascinating although there is nothing about the information displayed on the computer panels.

The command deck was equally changed drastically from being quite compressed to actually having the commander seat above the deputy which looks a little Trekky and I can see why it was dismissed.

The Pods also were through various shapes before becoming spherical although the one with extended arms that wouldn’t bend was clearly a non-starter, the interior seemed established from the start.

The evolution of the spacesuit went from some outlandish designs to something direct from NASA regarding horizontal stitching for when it gets inflated when worn. Although these are only designs, there is a subtle difference between the Clavius Base helmet design and that of the Discovery helmet because in the final result, it was easier to see inside. Saying that, unless author Christopher Frayling knows something different, I thought the photo of the yellow spacesuit was that of Frank Poole as its clearly shown Bowman’s was red in other photos.

The oddest thing about studying this book is that ‘2001’ could have been made today and still follow similar designs to those that are shown here. As it is, ‘The 2001 File’ is a superb addition to your books on the 1966 film and considering how many I have on the subject, I find that amazing. If I was to think of any books missing now, it would be something from Douglas Trumbull about the displays on all the spacecraft and even more insight into the ultimate trip at the end. As it is, this book is a jaw-dropping good and a lesson for all who are interesting in film design in how much work was done behind the scenes. 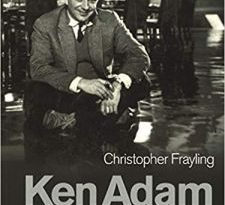