Back in the 1950s-60s, the super-family had pets. Even Batman had a Bathound. The others didn’t. Would a dog keep up with the Flash for a run? I doubt if Hal Jordan would want to take a dog into the air. Mind you Wonder Woman as a tot had a pet kangaroo-like creature and Aquaman had a pet octopus. Considering sales of DC Comics went up whenever they had gorillas on their covers, you would have thought one of them might have a pet gorilla. I should point out Congo Bill could implant his personality into a wild golden gorilla, said primate wasn’t a pet. 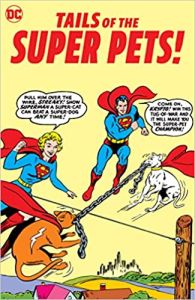 With the super-doggy film out last year, it was inevitable that DC Comics would do a collective volume as ‘Tails Of The Super-Pets’. Obviously, the Legion of Super-Pets dominates, even if they were from different eras. It was interesting to see how Supergirl’s car, Streaky, although not Kryptonian, acquired his cape which wasn’t indestructible. You might think the writers at the time were just doing cute super-powerful animal stories but really the stories would work with humanoids.

Visits to the future and Saturn Girl instilled telepathic communication between them. It makes you think if she’s that powerful she could do something similar to her fellow legionnaires for ease of communication. Mind you, considering that she was the one who hypnotised both Superboy and Supergirl not to remember each other when they returned to their own eras, her powers were always downplayed. Going back to the ‘pets’, I doubt if they realised that with super-powers also upped their intelligent quota.

There does seem a trend in this book to show an adventure with the pet before the origin tale. Granted, they might have been produced that way, it would have made more sense to have them the right way around. The story list shows the dates of original release and they are shown here out of order. That was probably to get you to like them first and then find out and they acquired their abilities.

Don’t expect this to be the complete collection. I was hoping to see the Space Caine Patrol, especially as it only had one appearance in Superboy # 131 (1966). There are a few other tales that haven’t been shown and there is a predominance of Legion Of Super-Heroes tales here as well so, presumably, DC might be edging their bets for a second volume. Oh, Proty II has some appearances but I’m not sure if he should be called a pet as when he take the appearance of humanoids he can actually speak and it wasn’t until the late 1970s that his species were given sentient status.

One thing that does come from all of them is having super-powered pets gives super-powered problems for them being playful and walkies and actually flighties. About the only thing we don’t see if what they are fed with.

These are quirky tales that DC Comics could get away with back then and, if you want to read them, then this is a cheap way to acquire them.