I never really expected to see the music of ‘Supercar’ to appear on CD. Considering this is early Barry Gray, it gives an opportunity to see how he applied various musical themes to the two seasons. It’s so easy to take for granted what is there than hear it in isolation from any TV series.

Although the main ‘Supercar’ theme, the last being an extended version, is played three times on this CD, there is rarely any fusing of its melody into the other music used. Well, when I came to the second listen, there are some obvious instrumental versions required for when Supercar is flying but it invariably moves into the mood of the scene. Barry Gray deliberately chose to go for the mood needed for the scenes required. When you consider this philosophy, it is consistent with all the other Anderson shows that he later composed. It’s beginning to make me hopeful that we will have CD albums for ‘Fireball XL-5’ and ‘Stingray’. 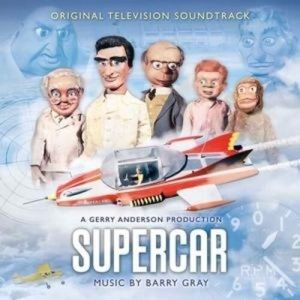 Parts of track 4 were re-used in ‘Thunderbirds’ and track 6 was certainly the original version of the space theme at the end of ‘UFO’.

The 14 page booklet includes black and white and colour photos from the series and some footnotes about the tracks themselves. A lot of the musical cues were generic so could be slipped in where needed to match the speed of filming.

Although I doubt if ‘Supercar’ is any Anderson fan’s most favourite list, what is important to remember is that all the key production staff were in place and learning the trade as they went in order to improve things. Barry Gray was already an experienced advert and TV composer but seeing his work develop here shows he was capable of writing whatever was thrown at him needing some mood music.

Undoubtedly, this CD will sell simply because it’s a Gerry Anderson show product but it is worthy as a musical item in its own right.