People die around Mallory Viridian. They don’t drop dead of a heart attack or anything natural or accidental. They are murdered. Not by her. She is always just there and able to see the thing that cracks the case. This habit has led to a great deal of suspicion but no one actually believes that she is the catalyst for these bloody events. No one actually says anything out loud but no one is sticking around for long.

First Contact gave Mallory an opportunity to avoid murders by begging a ride and seeking asylum on the sentient space station Eternity where the only other humans there are the ambassador begging for more humans to be allowed aboard and the soldier who has gone as far AWOL as possible who is very keen to keep his presence unofficial. 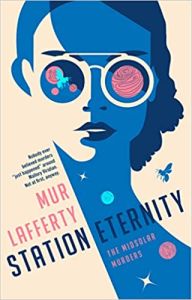 Mallory’s life in space is quiet and completely lacking in murder victims. When a shuttle full of humans is permitted aboard she decides to try and run even further away before her presence inspires murder. But, before they are even docked, the station’s symbiotic companion is killed and Eternity takes it badly. To save the station and all aboard her Mallory must solve another murder. Everyone has secrets and bizarre connections and no one thinks humans are more than children. Mallory had solved murders before but, this time, things have become very life and death.

I picked up ‘Station Eternity’ expecting a cosy mystery tarted up with space opera trappings. While this is technically true, this description trivialises a book that is very difficult to describe. Yes it’s a murder mystery set on a space station but that’s like calling ‘Lord Of The Rings’ a quest to return some jewellery. It is the connections with the fictional world that make the story work. How and why each character is on Station Eternity doing what they’re doing is central to everything. Everything might be connected. Everyone might be connected.

Each thread is part of the greater whole. Plots and conspiracies skip merrily across individuals and species. The US military might be doing what we all expect they might do if aliens show up. The rock-like aliens somehow end up with the victim’s corpse. The wasp aliens are spying everywhere but the blue ones won’t talk to the silver ones and don’t want Mallory to neither. The chameleon aliens think humans are children and are doing all this on purpose and that’s just for starters.

Lafferty has written a novel that is dense with information that reads so comfortably it’s like settling down on the couch with a late night movie. It’s not a book to read lightly. The first chapters ease you in and then you are off into flashbacks and other points of view that spark a thousand and one connections between the characters, human and alien. Each character feels real. They aren’t vague archetypes of ‘ex-boyfriend’ or ‘spying neighbour’. I can remember their actual names which is my benchmark for characters and ruins my usual way of solving crime shows by noticing who gets named most often.

‘Station Eternity’ isn’t Mur Lafferty’s first foray into Science Fiction murder mysteries. Her novel ‘Six Wakes’ was nominated for a Hugo, a Nebula and a Philip K Dick Award back in 2018. I would not be surprised if ‘Station Eternity’ gets similar recognition.

I enjoyed ‘Station Eternity’ enough that I was ordering ‘Six Wakes’ before I’d hit the last chapter. If you liked Becky Chambers ‘A Long Way To A Small Angry Planet’ or Leigh Bardugo’s ‘The Ninth House’ (yes, she has written something other than the Grishaverse novels and it is excellent), this is worth a read. 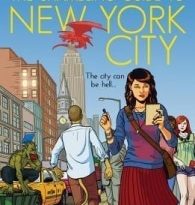 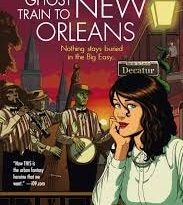