If there’s any gap in my comicbook knowledge then it is with Mike Friedrich’s 30 issue ‘Star*Reach’ anthology comic series. If memory serves, I think I only ever saw a couple issues in the UK and that was far down the numbers. As I didn’t know it was an anthology, it seemed a bit late to step in. 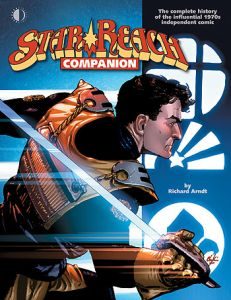 Richard Arndt’s book, ‘Star*Reach Companion’, seemed to be the perfect remedy for this. ‘Star*Reach’ instigated a lot of changes for independent comic companies although as he points out, it wasn’t the first, even back in the 1970s, just that most didn’t get past their first issues.

An extended interview with Mike Friedrich explains how he got ‘Star*Reach’ off the ground having already worked for several years at DC Comics and Marvel Comics. When you see who was in ‘Star*Reach’, all the artists used, including the likes of Walt Simonson, Howard Chaykin, Bernie Wrightson, Bruce Jones, Marshall Rogers, P. Craig Russell, Dave Sim (as a writer than an artist), Steve Leiahola, Mike Vosberg, Gene Day and Lee Marrs went onto the Big Two which should speak for itself.

Some of these gentlemen and lady are interviewed here so you can build up a picture of events. The most common thing is these people were just starting out and Friedrich gave them an opportunity to be seen and retain their own copyright. Interestingly, some of this work appeared in Marvel’s ‘Unknown Worlds Of Science Fiction’ magazine later as well.

Friedrich also created 6 issues each of ‘Quack’ and ‘Imagine’ and a few other magazines before cost buckled him. There is a glossary of content and information, which at the end I started to wonder how Arndt could expand into a complete book. He didn’t. Instead, he gives glossaries and content of all the small independent comics of that period where other artists were breaking out including a certain George Perez.

If you want to collect early work of your favourite artists, this book will become your biggest asset to find out what else they did. I was also surprised to see Neal Adams’ name pop up, often contributing pin-ups, some samples of which are shown here. You also start to see Marvel’s approach with ‘Epic Magazine’ started from here.

As a topping to the cake, there’s a selection of seven stories from ‘Star*Reach’. My favourites are ‘I’m God’ written by Dave Sim and illustrated by Fabio Gasbarri and Michael Gilbert’s ‘Encounter At The Crazy Cat Saloon’.

Don’t under-estimate the importance of this book if you’re sourcing early independent material as a lot of it is still out there.